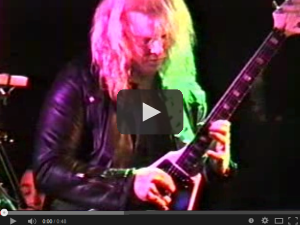 Guy, Curt and Mike all played in various Brandon party bands and have been friends since high-school. After playing with several local bands, Curt joined Vengeance shortly after Mike left.

The lead vocalist and bassist left the band in the middle of a tour, so Guy switched to bass and Curt became the sole guitarist, playing almost all the guitar parts on the first recording, Predator.

When Vengeance began writing songs for the next LP, Curt left the band, moving to Alabama for personal reasons. A year later he was back, re-recording the guitar tracks laid down by a fill-in guitarist. Soon the band, now joined by Mike as well as Curt, was touring again in support of the new record, Malicious Intent. 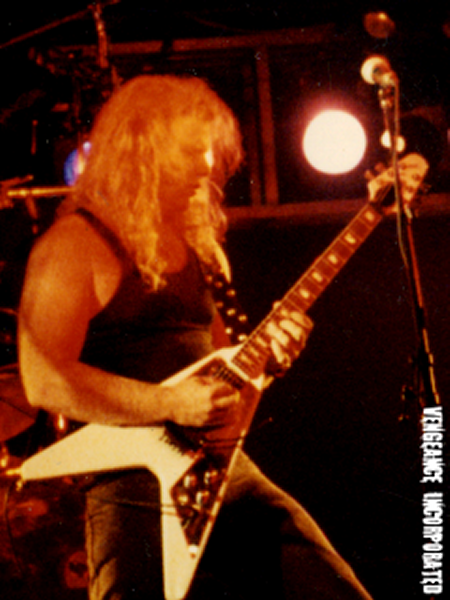 Curt brought back several new songs he had written in Alabama, and combined with some of Guy’s songs and Guy and Mike collaborations, the band began putting together the Bad Crazy project. After recording and touring in support of Bad Crazy the band took some time off to pursue solo projects. Curt began writing and recording in his personal studio. During the recording of Love Kills and after a long pre-release tour honing the new material, Curt decided to leave the band and the music business.

The band held extensive auditions, but it soon became evident Curt’s lead guitar, the heart of the Vengeance sound, was irreplaceable. Guy, Mike and Chuck finished the Love Kills project and decided to call it quits as the band Vengeance.

Curt still writes and records, and occasionally joins docweaselband onstage for a song or two. He currently owns a horse ranch in north-central Florida.

UPDATE 2014.09.01 Curt passed away from a long-time illness this week. Our thoughts are with him and his family. For our tribute to Curt as a member of Vengeance Incorporated see the post:
Remembering Curt : lead guitarist, vocalist, friend son and father.