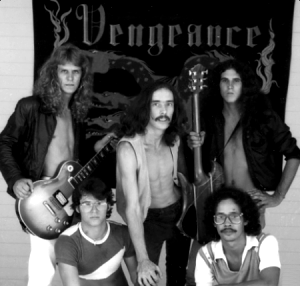 Vengeance played regularly throughout the Tampa Bay area, at college parties, keggers in the woods with unreliable generators, backyard parties with stages built on extensions of the back porch.

Under-21s in the area couldn’t go to bars and keg parties were the place to be, and Vengeance was the king of the keg party bands, with hundreds or even over a thousand people showing up.

Guy, Herb and Carl went through a succession of bass players after Mendel Schenk.

Del Weber from one of Carl’s former bands played for a few months, distinguished by a gig where he claimed to have done magic mushrooms. He was fired after that disaster and unable to find a replacement, Vengeance was inactive for almost a year.

The band eventually disbanded, until Guy’s brother Mitch returned from the Navy and joined on drums. Herb switched to bass, Carl Bennett returned on vocals, and the band started playing the keg party circuit in Brandon.

The drinking age had recently been changed to 21 and keg parties were a big deal at that time.

A couple dozen flyers scattered around a bar parking lot windshields would end up bringing over 1000 people to a keg party. Vengeance was the big fish in the little pond, the top band in Brandon.

Mike was joined as 2nd lead guitar and his brother in law Larry of Lars Lighting provided the band with professional stage production.

In June Vengeance played a massive party at a hall rented from the Electrical Workers Union Hall.

Guy bought his 3rd B.C. Rich, a Warlock, and Mike purchased 2 Gibson Explorers and traded in his Vox stacks for a Marshall. The band took the area by storm, it’s large and vocal and violent following was both a blessing and a curse.

They usually won any battle of the bands by acclamation, but their fans were likely to trash the club.

The later that year Vengeance rented the Mango Civic Club and threw another massive party.

Carl ended the night in a drunken fight in the mud in Bobby’s white jeans, and Bobby was not happy about that. This was the last gig with Mitch and Carl.

As they grew out of the keg party scene, Guy, Herb and Mike realized that they couldn’t keep playing obscure heavy metal covers and expect to play the A-circuit in Florida. Tired of the bottle club and dive scene, they recruited a new singer and drummer.

At the same time, Guy and Mike were writing originals. Guy’s song Judas (with the Blood Money intro as his spotlight guitar solo) made it into the setlist, as well as a band compositions Busting Loose and For You Tonight.

The promo shots were the first taken with the Vengeance 2.0 line-up, and include a shot of Liz in her boots. It looks like we’re having a pretty good time cutting up in more than half the shots.

It was probably the first real promo photo shoot in a studio with a real photographer for any of us. Good times.