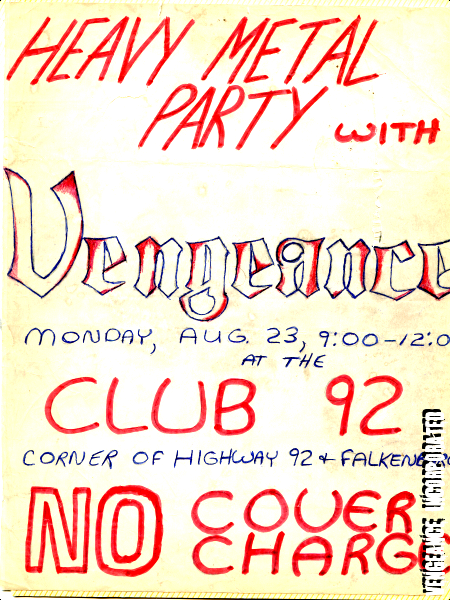 The mp3s are from a gig set up by our good friend and bandhouse neighbor Wild Bill at the Terrible Tarot Pub, a small, sedate little pub in Tampa that was overrun by metal-heads for a 2 nighter.

Besides the normal Judas Priest, Maiden, Sabbath and the NWBHM stuff like Samson and GForce this gig is also interesting for an early appearance of Blood Money/Judas, a piece by Guy that would later turn up on Malicious Intent.

The 2nd night a guy named Dan Johnson from Par Records came in to hear us and talked to me and Mike about the fact we played so much import metal and even a few originals.

He gave me his card and told me to give him a call, he might be interested in working with us. I never did call him, thinking he was full of shit.

He later recorded the first Avatar album, who later became Savatage and signed a major label contract. This may be one of the greatest regrets I have about those days, however, the calibre of our band and the writing we were doing at the time was not even close to the level of Savatage, so I don’t know if anything would have come of it or not.

Also, Par Records never had another success, although they worked for several years with another band Mike joined after leaving Vengeance for a few years after 2.0, later rejoining in 4.0. Curt’s brother Dave also joined the band, called Brat, but they never really got off the ground, only recording a few demo songs and an ill-advised attempt to do a heavy metal version of “Sugar Sugar” by the Archies (Mike was not involved in this boondoggle).

However, several of the songs Mike wrote for Brat were later reworked and resurfaced on Vengeance projects.

The first flyer was from a typical Battle of the Bands.

A band called Armed Forces, all dressed in camo with camo amps and some money behind them, were planned to win from the get-go, the rest of the bands were just cannon fodder.

However, several hundred of our unruly fans showed up and voted for us en masse. The judges, local DJs and such, who were supposed to be worth half the voting weigh, cut out early and didn’t pad their scores enough to contend with our overwhelming superiority in numbers, and we scored the upset win, fucking up the promoters dastardly plan.

Since our crowd scared the shit out of the bar owners, they offered us a consolation gig and we grabbed it, even if we did concede the “battle” and agreed to calm down our fans, who were ready to demolish the place (they did tear a sink off the wall, which was becoming our trade-mark).

We were used to this kind of crap, we were always outsiders in the local games. One of the reasons we always despised the local Tampa scene and refused to play along with it, at least until many years later when we became a part of it by the sheer fact of hard work and yes, talent, they had to respect us.

No photos or audio of this gig remain. Bobby Gibbs, our lightman and main supporter, made this hilarious flyer (which was meant in dead earnest at the time!), as he did most of the flyers on this page.

Curt was in a band called Shadowfax at the time who also competed in the battle. Curt’s brother Dave, who later joined Vengeance for a time, is in a band now with the bassist who played with Curt in Shadowfax. Everything is connected in the universe.

Or Tampa just has a really insular music scene.

The second flyer is for the consolation gig we were given at Club 92. Liz O’Brien, band artist, made this tamer version, but it lacks some of the raw charm of Bobby’s flyers.

Newpaper ads: A gig we did at the bottle club. We were booked for a week, but Carl lost his voice on the 3rd day and couldn’t sing. An ugly biker chick fell in love with him but he didn’t return the love and her boyfriend ended up taking some shots at the drums during the gig.

The 3rd (and final, we were fired after that night) night of the gig was “naked night” and everyone got naked. Unfortunately most of them were guys, but there were some girls, some getting fucked out on the dance floor.

One extremely inebriated girl passed out after getting high with our bass player in his car. He spent some “quality” time with her before coming back in after our break. A

girl pulled down Carl’s pants and attempted to give him a blow-job: Bobby, our lightman, turned off all the lights and put the spot on Carl’s limp noodle while everyone fell out laughing (except Liz, who was rightly disgusted).

Good times, but no audio, video nor photos remain to document the attrocities.

The 2nd newspaper ad is when we were on the roster of the Marsten Agency, which never got us a single gig and I believe folded after this ad came out.

It was a trailer park recreation hall with stuffed fish on the walls, but not a bad place and a great crowd of our regulars.

Carl gestulates as he rocks the house. Henry explains music to Guy. Mitch’s girlfriend (and future wife) Sherry gives him a hug. On the right giving Sherry rabbit ears is Mitch’s friend and one of our roadies Carlton Smith.

We played a gig near USF and that brought us to the attention of a guy named Malcolm Dumas (whom we refered to as “Malcolm Dumbass” after a lot of fucked up problems with this gig, you can barely make out his name as “director” in the center of the flyer, this is our own version with our name added prominently to the bottom), who was throwing a “happening”, a multi-media event with huge ambitions but low production values and execution.

He and his partner came to our practice to audition us and heard some of our originals and suggested they needed to swirl to a crescendo or some acid-trip imagery, I don’t recall completely.

What I do recall is that the video broke down, the sound system had enormous problems and although we had a good set, the other bands weren’t so lucky.

I think it rained as well. We didn’t get paid and the entire thing was a huge scam.

The audio didn’t come out either, so only these snaps remain.

They made us learn the Grand Funk remake of We Gotta Get Out of This Place for some strange reason. I don’t think we ever played it again after this.