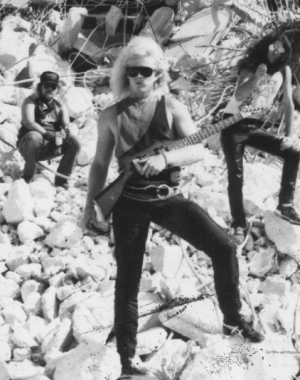 See the demos page for more tracks from this period.

Guy and Curt were writing and recording prototypes of Vengeance originals with David before Chuck joined on a crappy Teac 4-track.

Guy decided to start buying some serious recording equipment, with the aim of building a recording studio, rather than shelling out money for recording time, the money could be used to buy more equipment.

That year Guy founded fabulous e.g. studios in Brandon with a Teac 8-track and began recording and producing local bands.

Having their own studio was a great advantage.

This resulted in some very sophisticated product from a small studio with limited equipment.

Eventually e.g. studios was recognized as one the area’s top studios for the rates, with a sound comparable to bloated, lazy studios like Morrisound, which charged 100’s of $s per hour, consequently dozens of local bands ended up recording there.

Guy received several nominations for “best producer” in the erstwhile Suncoast Music Awards, but was sadly passed over for the actual award. It was all politics and payoffs man, and Guy just wouldn’t play that. He was too broke.

Guy bought his second Teac 8-track in ’87 (which he ran master/slave with SMPTE code) and the band began recording originals.

The demos for the Predator album were recorded and shopped around.

Vengeance landed a distribution deal with a small independent label (Rainbow Records) and released Predator in 1988 with Guy, Curt and Chuck.

Mike contributed some backing vocals but wasn’t really interested in rejoining Vengeance yet.