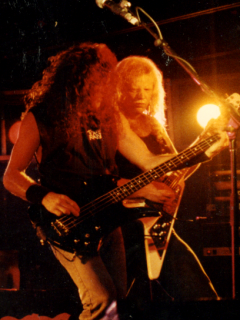 With Curt’s return to Florida from Alabama, the band dismissed Nick and Curt rejoined Vengeance, the band finished Malicious Intent and signed a lucrative distribution deal with Rainbow Records, which re-released Predator and Malicious Intent, and the band began work on their opus, a concept album called Bad Crazy.

Increasing conflict with Dutch posers who had ripped off the name “Vengeance” led to the band appending “Inc.” (and later Incorporated) to the name, and Malicious Intent was released under the moniker Vengeance Inc.

As memory serves, Chuck came up with the idea for the new name, joining the ranks of dozens of former Vengeance bands like Vengeance Rising, Stone Vengeance, Steel Vengeance, Vengeance Is Mine, Screaming Vengeance and the ever-popular Help There’s A Vengeance In My Bed.

in 1990 e.g. studios had stepped up to 16-track plus added DAT capabilities that enabled many more virtual tracks, plus Guy had acquired a lot of new recording gear and the resulting project, Bad Crazy gave the band a chance to step up to a new level.

Soon the band embarked on the first of a series of tours, opened for national acts like Savatage, Iron Maiden’s Paul D’Anno and Dokken, taped their first of several videos, signed with a new label, Propaganda Records, which acquired the rights to all the Vengeance releases, cleaned up the band and combed their hair, got Chuck out of prison and reattached Guy’s severed head and the band members were well on the way to becoming the weathy, famous and handsome young men they eventually became.

At least until all the venues for original heavy metal closed down.

In the mid-90’s, with the demise of most of the showcase clubs like the Rocket Club, the Volley Club, Ruby’s, Sunset Grill and others, there were no local venues to play all-original metal with a big stage and decent production, lights and sound.

The band made a calculated decision to switch to hard-rock and metal covers, mixing classic, 80’s and newer stuff with a few originals.

This only lasted a couple years before even the clubs playing hard rock petered out to zero and the band called it quits.

Guy switched to acoustic and rhythm electric guitar and the band played more dancable, alternative and commercial stuff like Tom Petty and Matchbox 20.

Mike and Chuck eventually left the band, and Mark, the guitarist from the Malicious Intent sessions joined Guy and they continue to play locally, including as a Gameday Band for the Tampa Bay Buccaneers.