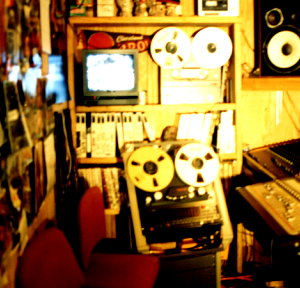 Recording, practicing and promo in the recording studio

Most of these were taken in the control room for various promo stuff. The control room was only about 5′ wide, minus the space taken by the mixing consoles so you can see we are pretty tightly packed in there. I think these were for an interview with some fan mag that was doing a feature about both the studio and the band.

The others from the same photo session are on the drum riser in the outer room. A few are from various recording sessions and an interview with a guy from an underground metal mag in Australia named Mike.

There are also some shots of some of the equipment we were using at the time for both the studio and for our PA. We mostly just used the PA to practice through, since most big clubs had their own PA systems at the time.

Everything between Predator and Malicious Intent were done on the 8-track and starting with Bad Crazy everything was done with the 16-track, including the 2nd Queen project.

I also had compressor/limiters, 32-band eqs, effects modules, 2 Tascam boards (12 channel for effects and 16 channel for tracks) a Tascam 1/2″ 16-track with built in DBX, Korg strobe tuner, Rockman rack-mount bass and guitar modules, Sennheiser and EV mics, JBL studio monitors and a lot of other stuff.

I spent literally thousands of hours in that studio, doing projects for my own band and dozens of other local groups, not many of which went on to fame and fortune but I hear the band Kamelot, which recorded 4-5 projects there finally got a contract and are still playing.

I also did radio jingles and Todd Grubbs and I did parody songs for recent news events that got played on 98Rock’s Ron & Ron Show in their hey-day.

I gave up the studio (which was built into my 2 car garage in my house) in 1999, but I still have all the equipment, I just haven’t had room to set it up again since.

I hope to in the future, even though analog is considered a dinosaur now, I think it has a unique sound, even when finally bounced to digital, and I hope to do more work there, if only for myself.