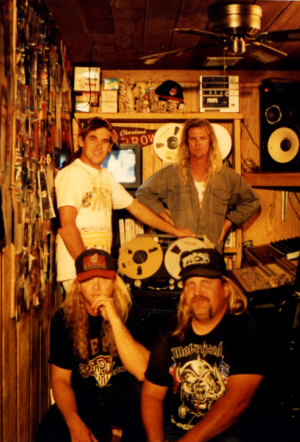 Bad Crazy demos
If chaos is more interesting than order, that probably explains why these versions are pretty tame. By now, with the line-up stable and a regular system of writing, rehearsal and recording, these versions are not substantially different from the final versions.

I had to listen closely to make sure they were, indeed, different versions and not just different mixes. Tiger Shark is spot on the same, even down to the “ad lib” ending.

It’s Not Over is faster and has a different feel, but Curt had composed his solo and pretty much stuck with it for the final. The backing vocals in some cases are not as big, and I did some of these myself, while teaming up with Mike for the finals.

The running order was even set already. Basically, it seems like we did a run-through of all the songs, then rehearsed a bit, then ran through the same basic arrangements and versions.

The finals are a bit cleaner and tighter. Also, the drum sound is much better in on the actual album.

If there is a down-side, the finals may be more constrained. Curt does some interesting fills on Bad Crazy that aren’t on the final.

Also, there are some “ooos” we elected to leave out of the last version. The horns and strings are a bit loud on this take, but I like the roto-tom fills on this one.

Meltdown, The Gates and Chase aren’t on these tapes because they were written at the time of these demos, but all the other tunes are here in more or less their finished form.

The vocals on Damned are kind of rough here, they improved quite a bit on the final.

Since the project was so tightly rehearsed and recorded, there aren’t any out-take songs that didn’t make it onto the album, only these alternate versions.

However, I consider this by far our best collection of songs, so I think the organization was a good thing for the final product, even if it did not yield any oddities or interesting artifacts.

The stacked guitar melody on ’89 is simpler and moves in a different direction. Also, the acoustic comes in on the stop breaks in the bridge instead of Curt’s electric.

Chuck’s beat on Beijing is a little cleaner and more compact. I think he opened it up a little on the final. Curt improved his outro fills on the final.

The kick on The Beast is half-time in the first half of every verse, an interesting idea, but coming in immediately with double-kick is probably more effective.

Mike’s double lead is here, in fact it was written as one of the first parts of the song and shaped the rhythm for the solo, not vice versa.

The “ahhs” are louder in this mix. We did a 6/9 chord for the vocal pad, but I don’t think its evident because I mixed it so far back in the final.

The Rollin’ link is here, showing how calculated our ad-lib stuff was. That was supposed to be a studio drop-in, as if it were a segment of a larger piece of me rehearsing or writing the song, but this early version shows it to be faux studio verite.

Curt does a more prevalent acoustic part on Nomad, plus we added a strange over-driven flange on the lead “specials” during the verse that didn’t make the cut for the final version.

I sort of like the very effectsed out vocals on this, however, mostly because I never liked my melody or performance on this, as I’ve said elsewhere.

Again, its revealed that Curt had composed his lead early and stuck to that composition in every version.

Curt was very disciplined in the studio and could lay down 3 parts to any solo he had prepared, even if he had not originally planned on playing harmonies.

He knew his solo inside out, so adding a harmony was always a snap.

He also had an uncanny ability to lay down harmony for any effect guitar, like whammy bar noises or dive-bombs.

The Nightmare solo is a good example of this. That entire solo is doubled in unison until the harmony part, with dive-bombs and shaking the whammy and it sounds like the same track doubled electronically, he did it so tightly.

Working with Curt in the studio was a very stress-free proposition: I would put his solo on repeat play and leave him alone with it, he’d come in and take a smoke break and tell me he was ready, then we would usually lay it down with no punch-ins other than normal breaks.

I never had to punch in notes in the middle of a solo as I did with other guitarists. With Curt’s feel and speed, it would have been difficult to do that anyway.

Liar is just a less polished version of the final, nothing changed really, typical of this set.

The only real difference I hear is that we replaced the keyboard part in the long instrumental break with vocal “ahhs” and did a vocal swell at the stop break.

The solos are note for note the same as the final, other than the mix.

Nightmare could be the same rhythm track, its so like. We must have notated the click b.p.s because most of them are spot-on the same.

It’s Not Over is an exception, its much faster here. Curt developed his stereo-2 guitar rhythm pattern more on the final, where one echoes the other nearly throughout.

I had an ill-advised 3 part harmony on the fast verses right before the bridge. Ugh, really sour harmony at the end.

I must have been still working them out. The “bong” is missing as well.

Next, I’ve included the video version of Beijing which is a little faster and smoother than the first one, but still not quite up to the standard of the final version.

I don’t think the vocals are very good on this version, but they are a step up from the demo and good enough, I guess, for the video.

And finally, the little snippet of the combined stacked vocal chorus on It’s Not Over that I used to construct the link track It’s Over.

It was tacked on this end of this master tape so I stuck it on here.

More than anything, this set shows how we developed the songs almost exactly how we wanted them before the final recording, leaving very little to chance or last minute addition.

It made it a lot easier to plan out studio schedules plus track usage because I knew precisely what was going on what track.