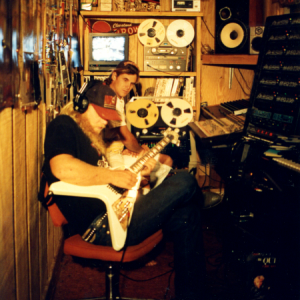 Love Kills demos 03
I covered a lot of this material in the liner notes and the discography page for this album. Some of these demos actually served as the basis of the final versions, I just stacked more instrumentation or vocals and filled them out more, rather than completely re-taking them, as we had done in the past.

As I’ve said elsewhere, this project sat for months, then was finished up in a rush at the end, so everything was not done perfectly, just quickly.

This version of The Light is one exception, its an acoustic, unplugged version I did to test the vocal idea.

The other 3 true demos, which I would typically do with a drum machine so the rest of the band could learn the song or add their own part, are Just One Night, Only One and That’s Not. You can see that I did almost a complete production even on the demo, adding all the harmony guitars, stacked vocals and keys.

The 5 new band songs, Someday, Stay, Bad Day, Sonora and Don’t Say Goodnight were in the first recorded version status, but that version was used because Curt left the band before we could do any more recording. In fact, he was to do lead solos on 4-5 other songs that never did get finished. Only Someday Soon, Stay and Don’t Say were properly completed as envisioned, of all the songs on the album. I still think there are some good songs here, even if I don’t think they were done justice production-wise.

Looking at all the work we put in on each album, its little wonder they took 2 years a piece to conceive, write and record the 2 versions, minimum, of each number.