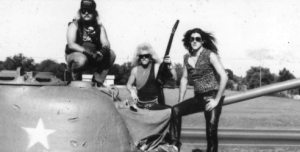 I believe these were recorded the first day we wrote and worked them out, we spent like 3-4 hours coming up with a lick (usually Curt started us off), which would invariably become the intro to the song, then work out parts for verses, choruses, breaks and usually something completely different for the solo.

Sometimes Chuck would have an idea for a drum part and we’d build a song around that. I seem to have an idea he had a 3/4 part that somehow became Latter Days, but the lick is so “Curt” that they might have worked it out simultaneously.

Curt was amazing at coming up with really memorable and distinctive licks that didn’t sound like rip-offs of other songs, which is much harder than it sounds.

Feline Eyes is an early version of Carnivore, live in the studio with me, Chuck and Curt before the left the band to move to Alabama.

As was often the case, I would tape us live in rehearsal playing a new song once the arrangement was hashed out, then tape my vocals over it experimenting with melodies and vocal ideas.

I even put some backing vocals on this. You can see the evolution of the song, even though the quality of the tape is not worth repeated listens. I only include it as an interesting artefact of the writing process.

Also here we have very early versions of Latter Days and Alone, recorded live in the studio once we had a semblance of an arrangement.

I would typically use these tracks to write lyrics and melodies. These were simply recorded with 1 mike somewhere in the room where it would pick up everyone.

This was probably one of the last things we did before Curt found out he had to move to Alabama, because we had been scheduled to begin pre-production on these 3 songs and maybe a couple of my old ones, enough to make it worth a drum session.

You can hear Curt teaching me the lick and trying to work out the 3/4 drum part with Chuck. Virtually every song on Predator (except those I wrote myself, like Running Blind, Arrikis and Traveller) and all these were based on a lick Curt would do while warming up and I would seize upon and get the band to expand on it.

I sometimes wonder if he imagined the throw-away lick he came up with for stuff like Predator and HMSQ would still be played in out set 10+ years later.