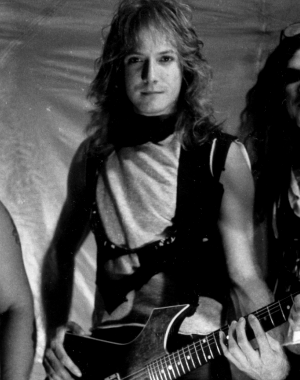 Malicious demos 01
These are Malicious Intent pre-production we did after Mark joined.

The quality is terrible on some songs because for some odd reason I used a low-bias quarter-inch tape on half of these and its muffled and ugly.

However, you can still tell what’s going on, and its interesting to compare Mark’s solos to Curt’s on the final versions, and even with Mark’s own solos on the 2nd versions we did for what was to be the final release.

On Carnivore, you’ll notice there are 4 measures instead of the 3 on the final version: that’s because I was back-tracking some backwards stuff and dropped the reels, breaking the tape and stretching it. I had to cut out one measure, since the track was nearly finished and we didn’t want to re-do it from the top. Now it can be told.

Black Ace starts a new session with a much better drum sound. Chuck’s double bass technique is very good by this time and its kicking on this track.

Black Ace was brought in as an idea by Mark, which Chuck and I both noticed was a direct lift from Loudness’ song ‘Rock and Roll Crazy Nights’. We had been listening to the album a lot and it was very influential to us, we were working on a half a set of cover tunes to augment our own stuff so we’d have enough to play an entire gig, and we were currently rehearsing “Like Hell”, “Clockwork Toy” and probably “R&R Crazy Nights”, so you figure it out.

Anyway, we re-worked the lick and came up with the rest of Black Ace. I remember Mark had intentionally created the stop breaks so he could put in those runs. This is a song that was very differently interpreted by Mark, Nick and Curt and it’s interesting to listen to the very different ways they each filled up those holes.

I think Mark came up with the initial lick to Whipped, also, to which I wrote lyrics castigating Curt’s ex-gf Katie, who was very disdainful of the band and who tried to get him to quit and join a more commercial project many times. The tone of this song was one of the driving factors behind the name of the album.

Cry Havoc was one of mine from our original writing sessions, half of a song Curt and I combined our parts to create. I junked his section and expanded my original idea, with lyrics from Shakespeare’s “Julius Caesar”, much of it lifted directly from Marc Antony’s funeral oration.

Carnivore, Latter Days and Alone, of course, were from the last writing sessions with Curt and fleshed out with Mark. I think the original cowbell-accompanied lick was Curt’s, it sounds a lot like the one from UFO’s “Shoot Shoot” and he was a huge Schenker fan.

Killing Frost was from an original idea by Mark, reminiscent a little of Queen’s “Keep Yourself Alive”, in fact, in later years I’d sing that phrase over the intro as a goof.

Murder in Your Eyes was mine, and Neo-Nazies was one I came up with expressly to give Chuck some space for drum rolls.

Reign of Terror was originally an idea by Chuck and the entire band worked it out together, piece by piece, but it was heavily drum influenced. Mark and I came up with the chord pattern on the acoustic part and the solo rhythm sounds like something I’d do, probably written while Mark was noodling over the rhythm section.

On all these versions I sing all the backing harmonies myself. The final versions, Mike and I both sang, and I think they sound a lot better and have more of a Vengeance “sound”.

We have 2 versions of Latter Days and Neo-Nazies, the first ones are the true demos and the 2nd actually the final versions used on Malicious Intent, but with Mark’s lead and rhythm guitar tracks and a different mix of course. This version of Neo has more prevalent sound-effects than in the final version.

And last we have me, Mark and Chuck jamming in the studio, playing an improptu version of Detroit Rock City by Kiss.