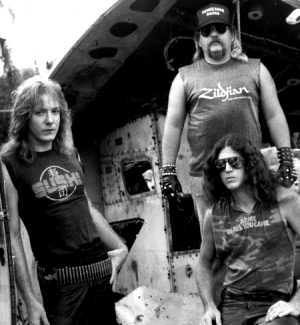 These are the mix-downs for what would have been Malicious Intent if we had released it with Mark.

The final versions contain these exact drum and bass tracks, as well as many other elements, including lead and backing vocals, keys, acoustic guitars and some “special” guitars and some rhythm.

It’s kind of amazing that we changed the arrangements so little that every song but Latter Days is within a few seconds of the original demo versions.

Latter Days is almost 40 seconds longer, and I believe it’s because we decided to create a section near the end inspired by Queen’s “More of That Jazz”.

We repeated sections of Cry Havoc, Black Ace and Murder in Your Eyes, interposed with the main Latter Days riff.

Instead of editing sections out of the songs as Queen did, we rehearsed the changes live and even pulled it off at gigs much later.

This added the extra 40 seconds to the song from the first demo.

Mark does the lead solos and most of the rhythm guitar on these. I’ve left off Blood Money/Judas because I played all the guitars on those and they remained essentially the same in the final versions.

Mark has an interesting angle on these, his solos are more technical flash and less compositional skill than Curt, in my opinion, and its a way to go, but I have to say I much prefer the final versions.

In fact, this was a major reason Mark left the band, the difference in opinion about the sound and the tenor of the project.

I wanted solos that more complemented the composition, Mark, as a lead guitarist, naturally looked at a solo as an end unto itself.

I also felt the fill work he was doing didn’t fit the mood or the compositions and interfered with the vocals in some places.

Lastly, Mark was unhappy with the amount of guitar I was doing, especially my stacked guitar stuff, which he felt competed with his work.

Since I was a bass player, this is probably valid, but I had been doing this kind of stuff since before we started recording seriously and I felt I had something to add.

In fact, it was main of the main factors in the Vengeance sound, I felt. Some of Mark’s rhythm guitar work does remain on the final version.

You can hear, for instance, the very end of Murder is identical on both versions, and it would have been difficult to exactly match that delay/echo/attack with a different take.

On other tracks, however, notably Whipped, I can definately tell Mike re-cut the rhythm track, its both fatter and tighter, Mike played a less wide-open style of rhythm than Mark and deadened the strings more and left less ring.

The rhythm on this version of Whipped, particularly, is not very tight for a final version. It does have an ass-kicking solo, however.

Things might have fared differently had Mike been in the band at the time, he was also always a moderating influence among the other strong and volatile personalities involved.

I also notice Cry Havoc sounds very dead and empty rhythmically, and there are some missed hits here and there.

The rhythm on Carnivore sounds like the final version, albeit with less flange, its possible either way.

The melody on the verse intro guitar is basically the same, I can’t remember if Curt wrote that, as this was a song he’d originated before he left, but I don’t think we’d taken it that far, but it seems odd Curt would keep a lead melody Mark had written.

Maybe we were all so used to hearing it we wanted to keep it. I hear Mike’s voice in the vocals, so he was doing backing vocals with me even then, months before he formally joined.

The intro stuff on Alone is mine, I remember this caused some contention between me and Mark, he was very against me playing big set pieces like this on the album.

Mike is obviously singing there also, his high parts are very distinctive and easy for me to hear. Very good job on the drums by Chuck on this particular song, I’m noticing, remastering it, how consistent and regular the kicks and snare are.

I either backed down substantially or junked the harmonized vocals here.

Curt included more lead than Mark did, he came in sooner, perhaps we’d planned on filling that rhythm break up eventually. Mark does a composed lead on this one obviously, since its all in harmony.

Reign of Terror is Mark’s magnum opus. I think the main part was based on a drum idea from Chuck, and the band worked out the middle part musically, but the guitar solo and the acoustic work were taken by Mark as his baby on this record and he put in an enormous amount of time and care into it.

Its probably his best recorded lead work. As I remember, he did all this stacked guitar work.

My keyboards were juiced down on later versions, they sound really false and intrusive here.

There was some controversy at the time about the ending acoustic part. I contended that I’d helped write the chord pattern and we worked it out together, but its undeniably Mark playing the part.

When Nick came in, he doubled it on gut string classical guitar, fattening it out, and those were the tracks used on the final versions.

I can especially attest that it’s Mark because there was a cricket in the studio, and like Buddy Holly and the crickets, he bled onto the track.

We found it appropos of course and kept it. Crickets must love recording studios, they end up on so many recordings. He was in the wall, so we’d have played hell getting him out in any case.

But that for sure attests to the fact that it is Mark’s original part, although we did not credit him on the album package at the time (nor for his writing contributions) due to lingering rancor between him, me and Chuck.

Chuck had brought Mark into the band and there was bad blood there also when Mark left. When Chuck took out an ad for us for another lead guitarist, he added “NO MALLOYS” at the end, causing Mark to declare war on us.

He later re-recorded the acoustic part of the track with another band, Hemlock, but they only ever released a home-copied demo of the tape so we did not bother our heads about it too much, but it was all part of the drama.

Before long we’d all buried the hatchet and remain good friends to this day.

Yes, there was drama. However, you can listen to some fine lead guitar work on these versions. I think a lot of our problems were based on ego and power struggles, we were both pretty young, and for the record Mark plays in docweaselband with me for nearly 10 years now and we get along famously and his guitar work is stellar.

This project was the wrong time and place.

He did, however, help us get through 6 months of the time Curt was gone and helped write 4 songs that ended up on the final album.

This is only meant as a snapshot in time and to document his work on the project.