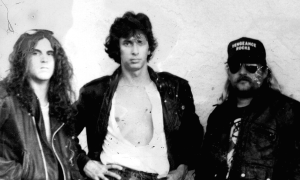 Malicious demos 03
These were the rough mix-downs I did straight to cassette after it became apparent Nick wasn’t working out and we wouldn’t be keeping his versions.

Black Ace isn’t bad, it’s interesting, but although some of the other stuff is ok technically, it just doesn’t work.

Also, I notice that Curt ended up playing a lot more guitar.

I don’t remember if it was my instruction to Nick where to play or if I just gave him the tape bare and asked him to play where he found holes.

He didn’t even play on near as many songs as Mark had done, and played virtually no rhythm.

His lead guitar, where he’s playing “parts” rather than solos is very weak and not tight at all.

His straight rhythm playing was just hopeless, not only was it not in time, the technique was all wrong. He played full chords with no “heel of the hand” deadening.

During this time I finally talked Mike in rejoining, and he took pity on us and joined, I think partly because he could see also that Nick would be hopeless live, there would be no rhythm, and also because Nick had so little frame of reference of metal, he didn’t even know how to take Mike’s playing.

Mike used to play dive-bombs and crazy shit at practice just to freak Nick out, but seriously, Nick just had no concept on how to play heavy metal rhythm guitar.

It’s something you have to have ingrained in you from listening and playing with a thousand metal songs, and Mike had done that, and Nick never had.

I can tell that Curt must have re-done a track of rhythm, because the stuff here that is mine and Mike’s replacement of Mark’s rhythm is really Rockman heavy and too smooth. Curt’s part added some edge.

Something that Nick was good at though, and that we did keep, is on Reign of Terror, the acoustic part.

Nick was a guitar teacher at Thoroughbred in Sarasota, and was very good at classical guitar technique. He doubled all Mark’s acoustic parts on nylon string classical guitar and it added a really nice tone to the sound and fattened it up and gave it a different tonal quality than the steel strings.

We had talked about him adding a classical guitar lead part on there, but never got around to it.

It doesn’t matter anyway because Curt’s head was absolutely where ours was on that type of thing, he had listened to the same music we had and what he did was wonderful and perfect and I can’t imagine it any other way.