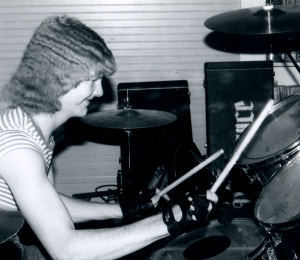 The first songs we attempted to record, using a 4 track machine. We taped the rhythm guitar, bass and all the drums lives on 3 tracks then pinged them down to one. Then we usually recorded lead guitars on 2 tracks and bounced them down to one, leaving 2 tracks for vocals, the only thing with any real separation on these mixes.

Some of these songs were dropped when Chuck joined and were not included on Predator album. Mostly, it was just because we were developing stronger material by then. Some evolved into different songs. The instrumental KGB is very similar to FTW, which did end up on Predator.

Lose Control is one I wrote, with heavy Deep Purple influences. It was considered too rock and not enough metal to make the cut, but listening to it now, its a good song. I also contributed the harmony leads on that one. This track includes a bonus ending, probably another take that was erased over (and contains a lot more high end, maybe because the tape hadn’t been re-recorded on as much?).

Hellrazor/Cry Havoc was a medley of two shorter songs. I brought my half back and padded it out with an instrumental section for the Malicious Intent album.

Fear No Man is an interesting oddity in that it didn’t make the final album, even though I remember we were very high on this song and thought it was one of the early ones we wrote that was very good. I think because it was written with Dave on drums and used double bass, and when Chuck joined he didn’t play double bass (he didn’t even have a double bass kit) and we felt the song needed it to really work, although Chuck’s version sounds fine to me now.

What does not sound fine to me are the vocals. I have no idea who I was trying to emulate here, but it sounds like I recorded most of these in the bathroom while taking a shit. These make the Predator vocals, execrable as they are, sound positively wonderful in comparison. I can only be glad they were so much better on Malicious Intent and better yet on Bad Crazy. I completely changed my style of singing by then to the point I was actually singing instead of grunting, yelling and screaming.

The last song is a one for which Mike wrote a chord pattern, then I added a monster mash of all the guitar effects you can work out of a cheap non-tunable harmonizer that only plays parallel harmonies. The tape ran out at the end of the song. Dave is on drums. Mike was not playing in any band at the time, but didn’t want to join the band right then. He was usually around though and we did a lot of projects together, this is just one thing we did one weekend for fun.