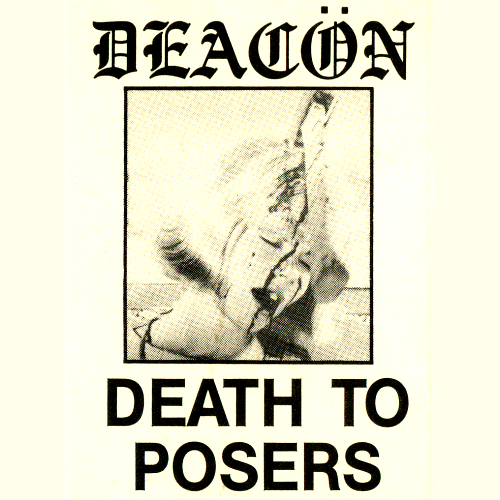 This is the kind of stuff you do when you have access to a recording studio, you are full of ideas and your regular band is not filling up all your time.

Mike’s ex-roommate and friend from high-school Bobby Gibbs was our most prominent band booster, as well as light-man and spark plug. He turned us on to countless import bands and songs which we added to our keg-party days sets; Holocaust/Death or Glory, Girl, Accept, Samson/Riding with the Angels and Go to Hell, Trust/Antisocial and many more.

He was also an aspiring metal vocalist. After the initial version of Vengeance broke up, Guy (lead guitar) and Herb (bass) joined with Nasty Savage’s original drummer and Bobby to form a one-off band called EarthDogs to play some Plasmatics, Holocaust and a few other hard-core faves at a local party. Someone fucked with the PA, rendering the gig a cock-up, but we still wanted to do something with Bobby, he had an undefinable energy and enthusiasm for metal that was really engaging.

About 2 years later I had my studio setup and I proposed doing a project. We had long known Bobby had a collection of crazy lyrics he’d written for years, to what end I have no idea, just for fun I guess. I put the idea for a project with a pick-up band composed of me, Mike and Chuck. Mike and I would add music to Bobby’s lyrics, he would sing of course, and we’d release it on a low-budget cassette, 1000 copies for $100 (low bias cassettes with no label).

The result was this project, with me on bass and guitar, Mike on guitar and Chuck on drums. Bobby had a great, screaming death metal voice. He didn’t do the low, gutteral grunting, he did a thinner, high-end scream that was always on-key and truly amazing, the main reason I wanted to do the project.

We were shopping our own Vengeance demo around at the time (Predator), so I didn’t want to muddy the waters by associating us with this project, which I also planned on shopping (hey, you never knew in those days). Vengeance was power-metal along the lines of Judas Priest, Ozzy and Maiden, and we had seen bands like Nasty Savage (who we considered inferior musicians and song-writers) actually get signed to Metal Blade Records doing what we called thrash-metal at the time, and we felt that the scene might be passing us by.

So this was not completely a throw-away “fun project”- I truly wanted to try my hand at thrash and hell, if it had been successful it might be an in for what I really wanted to do.

So, with all that in mind, I wrote ‘Death to Posers’ and a couple more in a day or two, Mike had the original idea for ‘Evermore’ and a few others and we hashed them out together, using Bobby’s hand-written lyrics as a guide. He didn’t always write in proper meter, some were a more ‘free-style’ verse with uneven lines, and some had great lines and ideas but were too short.

I combined some lyrics from different pages and got him to extend others and adjust lines so they would scan. All lyrics were exclusively written by ‘The Deacon’, a nickname I think Mike had given him for his “mayhem sermons”- spontaneous out-pourings of screaming/singing whenever he was wound up, which was frequently.

Bobby had been largely responsible for our early success as Brandon’s pre-eminent keg-party band before we were old enough to break into the bars, with his crew of import metal-heads (which initially included Nasty Savage lead singer Ronnie Galetti) who came to all our gigs, even after we started playing bars, and also threw some of the parties we played, supported us to upset the designated winner at Battle of the Bands farces, destroying venues and guaranteeing we would never be asked back to several clubs and other adventures.

He’s a really great guy and always up and positive. He was someone taken aback we’d do this project for him, he was also a modest guy and he didn’t know if he could pull it off, but the steamroller was already moving and he gamely gave it his best, with me and Mike in the control room egging him on to extremes that even surpassed his normal sermons.

Years later, I knew I needed something intense on the choruses of the song Malicious Intent song Judas, which we had been doing since out keg-party days with Bobby as our pyro-technics and lightman, and Bobby’s brand of screaming mayhem can be heard on the choruses.

On the Deacon project, we did the backing tracks ‘live’ in the studio with Bobby in the control room for separation doing the guide vocal track. He screamed so loud some of the guide bled onto the drum tracks and is still barely audible in places, not that it matters among all the mayhem.

Mike and I disregarded the thrash aesthetic a bit by putting on multiple overdubs and including extensive solos, which were not a huge feature of a lot of thrash of the time, much like punk. In the end, I think we failed at producing a true thrash metal project, we were faking it and you can’t really copy another style, you have to live it. We were more Ozzy/Priest/Sabbath/Queen/Maiden/UFO/Scorps/Accept etc and we were contemptuous of thrash metal and death metal and I think it shows on this project, we dumbed it down and none of the songs are particularly memorable or unique.

We also pretty much hated a lot of the “metal” coming out at the time, to this day I detest Metallica, Megadeth, Slayer etc. and considered them to be lesser talents compared to Judas Priest or even Iron Maiden, and we never would have been successful trying to play thrash. We just hated the idea of it and thought it was cretinous and dumbed down music by musicians who couldn’t play more progressive stuff.

We could have been wrong, but that’s how we felt.

Oddly, while most of the reviews we got complained the opening track, which was slightly reminiscent of “Beyond the Realms of Death” by Priest, was a ‘poser’ track and the rest was ok thrash, the review I found online below complains that the opener is the only decent track. Who can say.

Indy labels reacted with indifference and we put the remainders on sale locally, I think we sold a couple dozen on the strength of the cover, which I got from a horror movie book I had.

I believe the caption said it came from the movie The Black Cat, also known as Tales of Terror (1962)

We were going to use a photo Bobby had supplied, showing stacks for corpses, probably Holocaust shots from WWII (you could mostly only see their feet) from an old Life Magazine shoot, but the printer refused to print the cover unless we changed it.

Probably for the best.

Anyway, here is an interesting side project we did. The cassette and quarter-track are in storage as I write this, when I get access I’ll post the mp3s. I see the cassette is going for the (asking) price of $30 on ebay. Finally, someone cares!

Deacon : Death to Posers on the internet

Review for Deacon::Death to Posers

The title of the demo from this Brandon / Florida-based act basically says it all; this is not for posers and ‘false Metalers’ alike, moreover complimented by the lyrical contents of the anthematic Metaler “Death To Posers”, including ‘all-Metal’ phrasing such as; “We Reign In Millions, To Stand And Fight” or “We’ve Got The Glory, With Studs And Steel”, “Die False Metalers, We’re Out To Kill”……This is one of those ‘fist in the air & shout along’ workouts that truly captures the spirit of mid 80’s Metal.

Too bad, the band doesn’t continue the demo in a similar fashion, as follow-up tune “Evermore” shows a completely different approach, tapping into U.S. HardCore TrashMetal mid 80’s style. “Praying And Hoping” is, despite its slow-pace, a most intense commodity; mostly on account of the incredibly harsh, over-the-top scream-style vocalage by singer ‘The Deacon’; not the most obvious song-structure and approach.

The band slips into high gear with “Sins Will Burn”; a driven, Thrash / SpeedMetaler with a gripping beat. “High Noon” is pretty much cut from the same mould, patterned upon a fast, straight-forward drive.

“I’ll Be Damned”, is a regular, riff-based Metal number, and actually quite mediocre, running down the standard programming. Deacon are not much of a technical out in terms of musicianship and structure, but do have an edge, if only for its winning title-track.

Death to Posers! Wimps must die!

We’ve got the glory with studs and the steel
Die false metalers! We’re out to kill!

All Wimps must die!

We’ve got the glory with studs and the steel
Die false metalers! We’re out to kill!