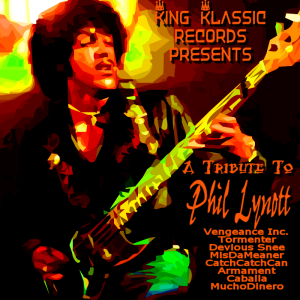 A Tribute to Phil Lynott

Recorded for a small label, King Klassic Records that had retained the limited rights to Phil Lynott’s songs by negotiating directly with his mother for a one-off album with various indy metal bands covering Phil Lynott tunes.

The deal was, the label had no money, so each band was expected to record the songs on their own hook, then send them to the label owner, who would compile them, pick a running order and attempt to remaster the tracks so that they would sound the same tonally and dynamically.

Possessing the advantage of our own studio, we quickly supplied two well-recorded numbers. Dan, the owner, liked them so much he used them to start off each side of the album, Don’t on side one and Suicide on side two.

Since Vengeance was between lead guitarists at the time, Guy did almost all the instrumentation and singing himself with Chuck on drums, and wah-wah specialist Mike supplied two solos for Suicide.

Supposedly, the bands would share in any profits. I have no idea if the album ever made any money, but we sure never saw any.

Included are 2 radio promo spots Guy did for 3RRR Radio Melbourne for heavy metal show host Allan Thomas, who had hoped to bring the band to Australia to tour, but funds never materialized. The promos remain.

The spots use a snippet from the climax of Suicide, which is why they are grouped here.