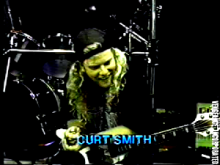 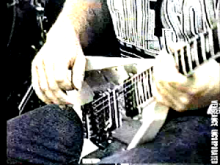 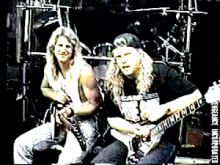 As I explained in the Trax page, local cable was required by law to provide airtime and production assistance and facilities to anyone who would complete the requirements.

They even let Bobby take the equipment on locale and he shot one of our live gigs as well 92.08.03 The Pit @ Rocket Club.

Instead of being on the graveyard of the designated “public access” channel which people only watched for ironic laughs, since Bobby’s show was music themed he got mandated blocks of time on the local MTV channel, so people actually saw this, unless they had the energy to get up and change the channel.

In those innocent times I knew a lot of people who left the tv on MTV 24/7, just as background noise or even wallpaper while they listened to other music on their “stereo”, a device we used to have in those days before computers and mp3 players and tablets and phones on which we listened to “high-fidelity” music.

Seems quaint now, but I assure you it was the custom of the day.

I doubt they even have it anymore, but this was in the early 90’s a certain segment of day would be dedicated “local MTV” if the locality were so inclined and had programming, so anyone in the Greater Tampa Bay Area who had MTV saw his show, because it was repeated endlessly.

He would do a feature called “Metal Shop” where basically some local guitar hero or another would noodle around and show you how fast he could play scales or various tapping tricks, unaccompanied.

Having our own studio allowed us to do better. Since Mike and I had done all the interviews up to this point, I thought it would be cool to let Curt have a moment in the sun and basically modeled the show around his parts on the newest album, Bad Crazy.

I did all the pre-production, like making custom mixes of the songs we would be using with and without various tracks, ran the tape deck, then Curt would play along, showing and explaining how he added the tracks and what he was doing, what key, mode, etc.

We did Chase the Dragon and Nomad like this, and Nightmare Landscape with Curt and Mike doing the double lead together.

I was going to do a segment where I did one of my 32 stacked guitar extravaganzas, but it seemed like it would be boring and stupid in execution, and anyway, I got to do plenty of other stuff so I junked it after doing some test prep work on it.

This stuff turned out much better anyway, because Curt is and was the best guitarist in the area, the best I ever played with and the best I’ve ever seen. You can see on the vids how carefully constructed his leads were, the thought he put into composing them and how well they complement the music, not just playing fast licks over top of vacuous rhythm.

I also included a promo Mike did just because its so goofy (nice sunglasses!).

I don’t know if Bonds didn’t know what he was doing, or if he was just really sloppy, but his editing technique left much to be desired.

These lame, sloppy edits are actually cleaned up from what he gave me on the rough VHS. I left in the bad take on Chase just because its kind of funny, but Bonds cut off beginnings and endings and left awkward pauses in the middle that were just too hard to edit out.

Still, its some interesting stuff and I’m glad I dug it up.