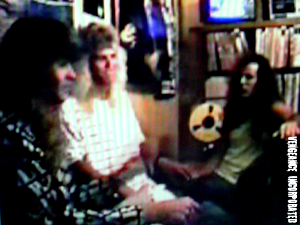 How about a locally produced video magazine?

Yes, our stardom ran the gamet from the pathetic to the absurd.

However, Mr. Todd Grubbs is a gentleman extraordinaire, a self-promoter beyond compare who really busted his ass locally to try to make a splash in a scene that actually existed in the early-mid 90’s, then dried up to nothing in the late-’90s.

Tampa once had 3 local music magazines, the Suncoast Music Awards, the SXSE Music Conference, a bunch of big and busy music stores that were hang-outs for all the musicians and several circuits of bars, A, B and F.

F still exists, nothing else from that era does.

However, Todd did manage to sell some his self-financed and self-produced “Todd’s World” vids, and thanks to a support network of things like the local music mags, people actually heard about them and watched them.

So, its not as sad as it could have been and later got, and Todd was pretty cool to have us on the first episode, which I think was the one that people actually saw.

I was also in Todd’s band, Universe, part-time because Vengeance wasn’t playing any more than once every month or less, and I did a lot of studio work with him, plus writing and recording stuff like radio parody songs etc. and his own solo stuff.

Todd was also cool enough to come to almost every gig we did and stand there with a heavy-ass early 90’s vid cam on his shoulder for the entire hour+ set of the same goddam songs he’d seen 2 dozen times before, so I give him props for that.

This vid is me being a smart-ass and Mike trying to get an answer in edgewise, our usual mode of doing interviews.

It’s all mostly idiotic goofing on interviews and moronic bullshit. Hey, we went with our strengths.