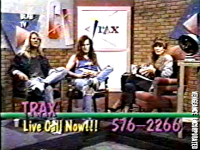 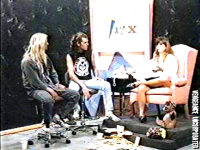 I don’t want to be mean here, she was nice to have us on, and I was being a wise-ass in parts of these (not in a mean way, just in an “I’m trying to take it less than seriously that I’m being interviewed on a cable access show” kind of way), but she could hardly be more humorless, she comes off as schoolmarmish in the end of the 2nd, shushing and scolding me for cutting up in class.

I mean come on Cathy, “Where do you guys see yourselves in 5 years?”- well, let’s see. It can’t be much worse! I’m pushing 30 in a 2-bit all original heavy metal band on an indy label making zero money and you’re the host of a free cable access show that gets fewer viewers than the guy in the chicken hat who sings along to Aerosmith songs while trading insults with the loser teenagers who call him up to slam his singing.

Yes, that show really did exist.And it really did beat out shows like this, that might have been a lot more fun had they taken themselves less seriously, but maybe it was just a game of “we’re pretending we’re not pathetic”, and I include us in that statement.

For you kids who don’t know, in the early days of cable, the US Congress stipulated that cable companies set aside an entire channel for “local access”: any individual or group who would complete their training course and act as an intern for already existing shows for a period of time would get access to pro equipment to tape their show, a rudimentary crew for cameras, direction and sound etc. plus access to an editing room and assistance and training on how to use the editing console, then finally, regular airtime.

The Bobby Bonds Metal Shop was another of these cable access shows. Cathy’s was in Pinellas County (St. Petersburg) and she was the girlfriend of Savatage Drummer Dr. Killdrums, who booked us regularly at The Rocket Club and even opening for Savatage on occasion and he knew us, she needed guests, it was a marriage made in heaven. Bobby’s show was out of Tampa (Hillsborough Co.) so we were in 2 major media markets.

We were surely on our way to superstardom.

Since a large number of people couldn’t or didn’t care to complete these requirements there were only about a dozen or so shows on at any given time, so they replayed the ones they had endlessly.

It’s just sad. They said there were phonecalls for us but I don’t remember ever taking any. Due to lack of content they replayed these shows 100x so you could usually tune in and catch our act regularly.

In the 2nd one I made a very poor fashion choice for my hair and end up looking like Eddie Munster with that enormous viddow’s peek. Hard to look at now, but I bravely include it for posterity’s sake. Enjoy the atrocities, kids.