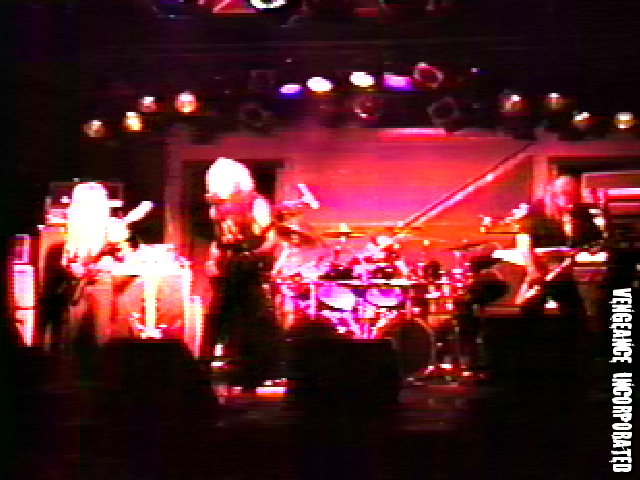 Starts off with a sound-check of Action , and I can remember we were all a little nervous, this was only the 2nd gig in about 5 years, but confident, the sound guys for the headliner were the ones whooping it up at the end of the soundcheck, they liked us.

This was our first gig in quite a while and the first one we ever video taped. We’d been working on Malicious Intent and Bad Crazy for nearly 2 years and had only played one date in all that time.

So I think I, at least, was a little tight, it sure doesn’t sound like I’m having fun in my between song patter, at least until Murder in Your Eyes (which we play 100mph, like most of the songs in the set).

This song was a staple of the gigs of that time, I don’t remember why we dropped it, although Cry Havoc and Carnivore sure fit together nicely for our later, standard gig.

Murder got pushed down the set and finally retired from the show. It’s fast, has 3 part vocals and a nice double lead guitar part, seems like it would be a good fit, no idea why it got lost.

Black Ace would also be replaced by Tiger Shark as our standard opener and Killing Frost rarely played after Bad Crazy came out.

Mike is playing my B.C. Rich Warlock for this show, it was before he got his Explorers.

I had ordered that guitar while I was still playing guitar in the band, but it came after I had switched to bass and I never got to play out live with it. I’m glad Mike got some use out of it. He also used an Ironbird I got later in a trade.

On the last verse of Carnivore I get crazy and sing Mike’s high part.

The intro to Predator “This is a tune we’ve done every night of the tour, we enjoy doing it, we’d like to do it for you now,” was something we’d heard Dio say at a recent concert and it was something of a goofy catchphrase that week, which is why Todd laughs.

This started my Bad Crazy break tradition of running around the crowd like a maniac with my wireless.

I moved it to the Highway Star solo when we started doing covers. It may have annoyed some of the guys, either song, but it was fun and freaked people out who hadn’t seen it before. “What the fuck is this guy doing?”

I totally blow the words on Damned if You Do and screw up a few lines on Bad Crazy as well, something I would never do later on, I was so used ot playing and singing them I didn’t even have to think about it. Here I’m still thinking, and the song had only been written a short time before, but we liked to add new songs to the set to get reactions, even before the album was released.

All through Action, up in front of the stage going nuts, you can see the former singer for Universe, Todd Plant, Todd Grubb’s band at the time, in which I also played bass because Vengeance wasn’t all that busy (the drummer was also named Todd, so we considered naming it “3 Todds and a Guy” but then we didn’t).

Todd had fired him a few months previous, but we were all still buds. He was totally blown away by the band and spent the rest of the night trying to convince me to let him join as lead singer and I could just play bass and sing backups. I declined, obviously.

Very good crowd, when you don’t play for a long time it’s easy to get people to come and see you because they haven’t come out in so long, they aren’t burnt out on you.

We got this gig because we were doing our video for Beijing up the street and someone from the club stuck their head in to see what was going on, thought we were somebody important, and booked us for the night with Slaughter, who was a national act on a major label.

However, at minimum half the crowd was there to see us and took off after our set.

I included some after the show tomfoolery, the crowd was nuts for us to play an encore, but Action was our encore, plus the headliner wanted us off stage, pronto.

They were one of those bands who did not like the opener to do too well.

I hung out a song or 2 and the band was a little salty that our crowd had not hung around, but on the other hand, they were playing rockstar and took over an hour to get on stage.

They had the only dressing room, we were in a stairway and we never saw them or talked to them, they didn’t come out to watch any of our set. They were too cool.

But we had a wonderful gig, all the people who came into my studio to record for years or the few people who had hung out at rehearsals for the previous several years were pretty sure we were a tight and talented band, and this seemed to prove it, and we were pretty happy we’d translated the complex stuff we’d been writing to a live situation.

All in all, a successful night.