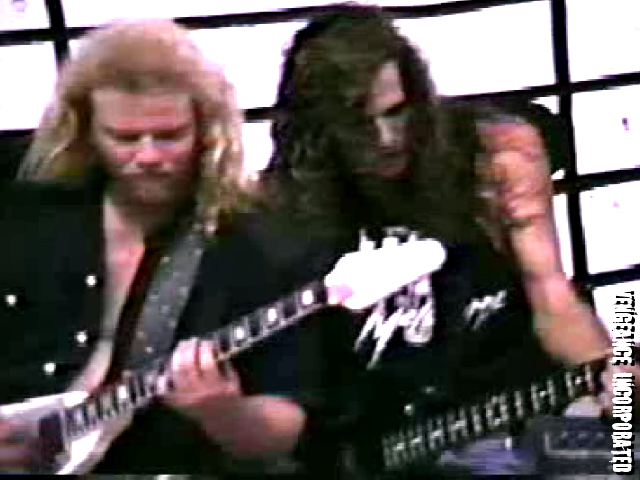 This is a goofy ass gig along the lines of Spinal Tap at the Air Force Base in that the people just walking up didn’t know what to make of us because they were regular, normal people and we were freaks.

However, we brought a buttload of our friends so the crowd response is pretty good, plus a bunch of hard rock rednecks were there and every other band was pretty tame so they were glad to see us.

I think they all lived in a trailer park, and so all the old ladies and fat redneck chicks who lived there would come out and see them.

They were very hostile to us and chanted for Entourage every time there was a lull. I think we played with them at GK’s as well and showed they hated us there too.

This gig is interesting in that it was the second time we’d played Goodbye ’89 live and the arrangement is different than when we played it after.

For one thing, I sing the intro, whereas Mike would take that over in later gigs and I would sing background harmony, he would start the song alone, which was pretty cool.

Also, we have a drop-out after the first half of the last chorus, kind of like the record, then the band kicks in again.

It’s interesting, but I liked our later arrangement better. We also play it very fast here.

The backing vocals are a mess, we don’t have the vocal arrangement worked out yet, and it’s weird how I drop an octave for that break at the end, it just doesn’t work, I see why we dropped that.

What is weird is how close to our set-list even 2 years later this would be. I guess we got a nice flow going and just kept it. Even if you go back to the previous gig at Volley Club, you just drop Black Ace, Alone, Killing Frost and everything is in place for our main set.

One thing is that gig was a really long set, we’d never need that many songs usually.

I walk up to Curt and say something after Predator, probably dropping a song, I would guess Killing Frost, near the end of the set, someone probably signaled me to wrap it up. Then Mike walks up to see what I wanted also.

That was about the fastest time we every played Predator, the time for the song itself is about 4 minutes even.

I used this band introduction thing to end our video sampler for a long time, ending right when I say “Hi, I’m Johnny G. Lyons–(laughs and catcalls) Not really!”

For those of you who are non-locals, Johnny G was a popular bar band guy whose band plays all that super old burnt out shit from yesteryear.

He’s famous for asking you to sit in, then disappearing so you have to stay up there. He’s the epitome of “putting in the time” musicianship, and talks away about half his set, but he’s very popular and works steady, so he must be doing it right.

I don’t know what else to say about this other than the sound is super boomy and it was hard to hear what the hell was going on sometimes.

The bass sound, at least at the beginning is fantastic though, the best I’ve heard on one of these vids. Lots of fret rattle, which I love.

Two other great stories: this drunk asshole came up to a group of us before the gig while we were waiting to go on and started fucking with Curt, who just stood there and didn’t say much, although he was probably about to deck the guy.

A very good friend of ours, who had set up the first Vengeance gig in several years not long before, Jim Thomas, told the guy to settle down and lay off.

Jim was about 6’4″ and pretty buff. The guy slurred a really smart-ass remark and made a move as if to swing. Jim hit the guy and knocked him out with one punch, then landed another while the guy was on the way to the ground.

I mean, this guy dropped straight down like his bones liquified. Jim walked away and the cops were there in like 2 seconds.

We all said the guy seemed really drunk and just passed out in front of us (his mouth was bleeding but the cops didn’t make an issue of it). Last I saw of him the paramedics were taking him away in an ambulance.

The second story is that one band member met a girl who looked to be about 15 but might have been older (she had tits) and talked her into going upstairs where the dressing area (wouldn’t call it a dressing room) was and knocked off a quick piece of ass.

I won’t say who it was to protect the guilty. We all thought it was pretty funny, she came down looking kind of dazed, I think she just wanted an autograph. She got one.

My stunning blonde girlfriend at the time, Mary, walks up to the stage at the end of Carnivore, a song I wrote about her.