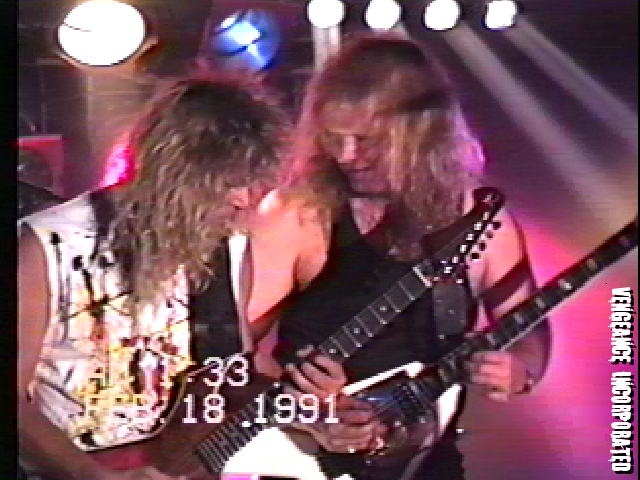 I don’t remember a great deal about this gig to differentiate it from all the other times we played this venue.

It was our first time playing at the Rocket Club. That was a very coveted gig at the time, they generally had top 40 bands there or very commercial hard rock bands, they didn’t book many original bands and very few heavy metal acts either back then.

The owner used to take groups under his wing and push them, letting them live in the apartment out behind the club and paying them (meager) salaries to rehearse and write songs and gig at his club.

We were not a candidate for this type of deal because the owner, Fred, didn’t particularly like heavy metal but was slowly bending to the fact that his clientèle did.

We lucked into the gig when I heard a band was cancelling and called up offering our services cheap and got booked immediately.

A lot of other bands were trying to get in there and it was quite a coup.

Of course later on we played there regularly, but at the time it was a big deal for us.

Dokken was playing that night, but they weren’t huge even then and there was not anything like the crowd for Savatage a year later.

The date refers to the fact we were playing after midnight, it was actually a Sunday night, or very early Monday.

Once again you can see how little our setlist changed over the years.

This is pretty much our standard set from mid ’90 until we quit playing all originals in ’94.

This is the updated arrangement of Goodbye ’89 with me singing the intro and but with Mike singing harmony and his solo at the end.

Once again the hated time-stamp is over the entire gig.

Some interesting background stuff at the end with the entire band and Frank, the singer for Todd’s band Universe, in which I played bass, his wife Cindy, my very lovely but volatile girlfriend Mary, with the big blonde hair and leather mini-skirt and Todd Newland, Universe’s drummer all hanging around and shooting the breeze after the gig.

The sound isn’t bad and it’s a good video picture. There was a decent crowd for Dokken. All in all a pretty fair gig.

A funny story, after the gig Don Dokken and some of his flunkies were playing pool in the back poolroom, and he had a bodyguard or someone blocking anyone else from coming in and “bothering Don”.

The Vengeance guys and Todd’s crew and a few friends just wanted to play some pool and drink a few beers and wind down. They (I wasn’t around for some reason, I heard this 2nd hand) told the guy they didn’t give a shit about Don Dokken, they just wanted to play pool and he heard what was going on and knew he looked like a dick, so he let them in.

Some of the people did talk to him, but it was cool and everything worked out, but it was kind of funny for him to hear us bitching about how we didn’t care about him being there and had no intention of “bugging him” for autographs or whatever he thought people were going to do.

He seemed like an ok guy, the guys in his band were friendly and we talked about the metal scene with them a little bit.

He was a little put out by the lack of turn-out, however. What did he want for a Sunday night? He should have just taken the night off. He was Don Dokken for cripe’s sake.