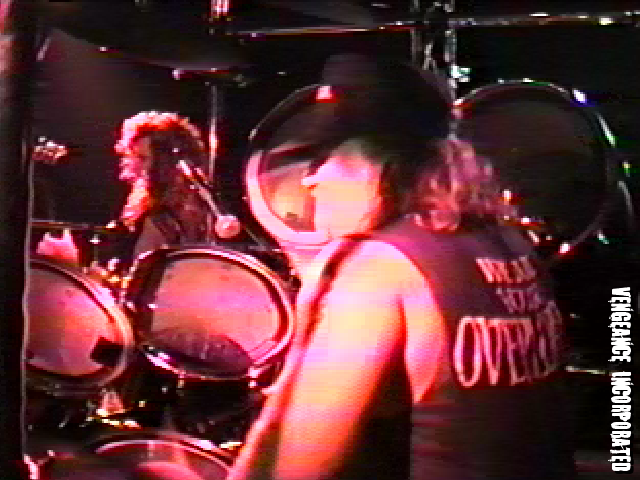 with Injustice and Roadkill

This video is kind of unique. First, there is a long soundcheck focusing on each band member, and 2 soundcheck songs.

I remember the other bands sitting around and kind of salty at all the soundchecking we were getting, because obviously with 5 other bands they would not get the same time invested in their sound in the hustle to change over.

Often mikes got misplaced or left off amps picking up ambient sounds. I told a couple of the guys in one band that we’d been doing this for a while, and as long as you didn’t have to start too early in the night, first slot was not a bad way to go.

Not only did you get a really good soundcheck, all the other bands and their fans would be your audience, which would dwindle as the night went on and each band’s fans left. One kid (from the band who had organized the gig and who were “top of the bill”) disagreed and said it was worth it to headline.

I heard him later complaining to the sound guy that we had gotten about an hour’s soundcheck and wondering how long theirs would be in between bands. The soundguy said “none, I’ll do it on the fly” which didn’t go down well, but we thought it was kind of funny, anyway.

They ended up playing in front of their girlfriends, the waitstaff and about 5 other people while we played in front of at least 100.

Headlining was not always a glory position, not in this type of situation.

Secondly, Todd got on stage for parts of Bad Crazy and focused on Chuck from behind the kit, and then shot across the front of the stage from Curt’s side for HMSQ and Reign of Terror.

This was a mixed blessing because this is the gig with the best audio quality and tone, and most of Bad Live & Crazy is based on this gig. However, on the songs where Todd came up on stage to the drums, the rest of the band drops out. I either had to edit the songs, combining with an inferior sounding song that had a better balance, or use a completely different version.

The 92.03.27 Off Limits gig was used as a secondary choice for songs for the live version, so there must have been pretty good acoustics in that place.

Although I remember it as a big gymnasium-type venue, it was a teen club/disco before it became a non-alcoholic rock club. Now it’s a Green Iguana.

So this gig was different in a lot of ways. We shook the setlist up slightly by moving some songs around for a change.

Also, this is the only live version of Beast with 2 Backs, a song we added for just this one gig.

It didn’t work that well so we dropped it right after.

This was the first night, Saturday, of 2 gig nights in a row.

Sunday night we did the Graveyard Shift at the Rocket Club and played the same set, but replaced Beast with Nightmare Landscape and Murder with Latter days.

You can see when Todd pans the audience that there were a lot of people there, but they were a bit subdued, mostly because they were fans of the other 5 bands playing that night. We started at 10 and it took nearly an hour for bands to play, get on and off, so the last band had a late night of it.

We were supposed to have started at 9pm, but there are always delays, another reason we liked to get an early slot.

We didn’t push for them to hurry up, since we were ok with it, but the other bands were beside themselves by the end of our set.

Also, we probably had the biggest fanbase out of the bands there, and our people pretty much all left when we were done. The club owner noted this and booked us again for the next month.

We had a good contingent of fans there, it was our first time playing the Off Limits.

It was ostensibly a teen club, but since they had bands, and it was hard to find venues for original acts, most of the people in the club were adults, not kids.

All of the bands were guys in their 20’s and 30’s. The other bands (the nice guys, anyway) were blown away by our soundcheck songs and had a lot of nice things to say about our set when we were done. I don’t think I saw any teens there at all, maybe a couple.

Most of them were playing obscure metal cuts and a few originals, but nothing as ambitious as the stuff we were doing, no double leads or 3 part harmonies, if any backing vocals at all. So, it was a pretty fun gig.

Other than the fact that the monitors fed my vocal mike back the entire night (the soundguy did considerably more work on the outfront sound than he did with our monitors).

I stop singing sometimes and leave out lines, most noticably in Bad Crazy. The guy had a stage board for mixing the monitors, but no one running it, so he had run up to the side of the stage and it was a bitch getting him to move.

We just dealt with it best we could. The front of the house sound was stellar though, I have to say, the long soundcheck was worth it. This may be the best mixed video, you can hear everything other than a few times he misses that it’s Mike playing lead.

I once again fuck up the first few lines of Damned. I have no idea why, at earlier gigs I was fine. Brain damage kicking in.

This show has the new arrangement of Goodbye ’89, with Mike’s guitar solo replacing the stop break, but I still sing the intro instead of Mike, even though he had been singing lead on it for a few gigs now.

The very next night he would start doing it and continue to do so as long as we played it.

I can’t remember why he didn’t sing it this night, but it sounded much better with him taking the lead and me on backing vocals.