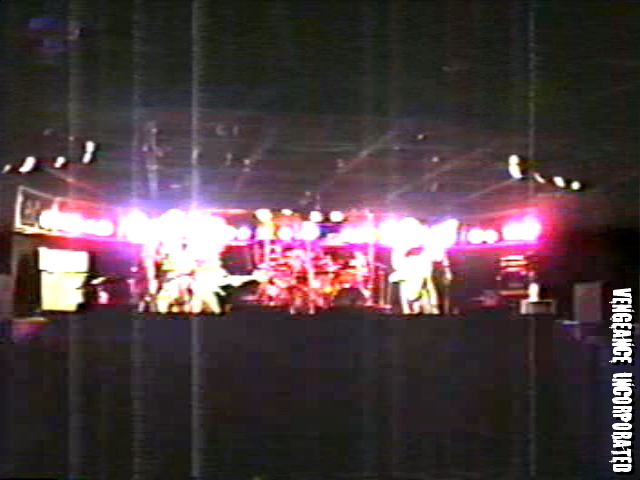 Sunday Night and there are like 20 people there including the bar-maids. We try to keep a good attitude on a lousy night.

Original metal bands were relegated to crap nights like this: at least we always had the foresight to go first, which would seem like a lesser position, but on a Sunday or Monday night, which are the nights an all original metal band with out a consistent following plays, the earlier the better.

I did hang around occassionally to see some friend or another’s band play and it was not pretty, sometimes I would literally be the only person in the audience unless they had girlfriends or a crew.

This is one camera placed on a tripod and left alone, so its a pretty boring video, and its a wide shot to get the entire stage, meaning the top and bottom are completely black, so there’s just a thin strip of us in the middle, like widescreen.

I have to thank Todd Grubbs once again for suffering through these gigs just to video-tape us. It had to be boring and lame, but he came out every time I asked him, did a competent job, tried to add variety to the videos, was complimentary and gave an honest appraisal of our performance and was just an all-around positive force for good at gigs, when I was often cranky and touchy.

Thanks Todd, this site would be much less without your work.

The sound quality isn’t bad and the band is tight, so its still worthwhile with a static camera for a change.

Except for Latter Days, this set list is very much our standard set during this time. Latter Days was usually inserted for heavier gigs.

This was the first time Mike sang the lead intro to Goodbye ’89, and it sounds 100% better with me on backing vocals.

It’s kind of weird that the night before I did it, then he did it the following night, maybe I forget he was going to do it?

I can’t remember why he didn’t sing it the previous night, but it’s a vast improvement.