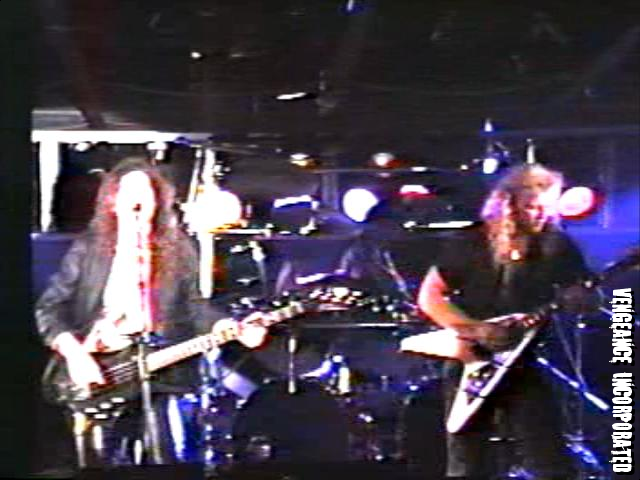 This was a Monday Night regular event and the club publicized it, plus we had a several dozen people there so it was a decent turn-out for a Monday, maybe 100 people, 200 if it was a really good night, and the early band again had the advantage here; you got all the other bands and their fans watching you waiting until it was there turn.

This is a hand-held shoot, and although its shaky, its a lot more interesting and the band looks great and we’re up with the crowd and playing well.

Todd also pushed the saturation and light on the camera so it looks more like film. There’s also plenty of smoke so you get nice beams from the lights.

I still have that wooden “Vengeance” sign. It used to hang on the wall in my studio, now it sits in a storage closet.

My chatter is better on nights like this when there are actually people out there to respond. Resplendent in my goofy ass jacket for several songs, then my favorite GnR (I hated the band, loved the shirt) “Lose Your Illusions” t-shirt with the arms cut off, as was the style of the day.

Due to my motormouth chatter, all the times are longer than usual for the songs.

This show marked the second time Nightmare Landscape had appeared in the set, which is why its so early. Later on it would settle down into the Latter Days slot.