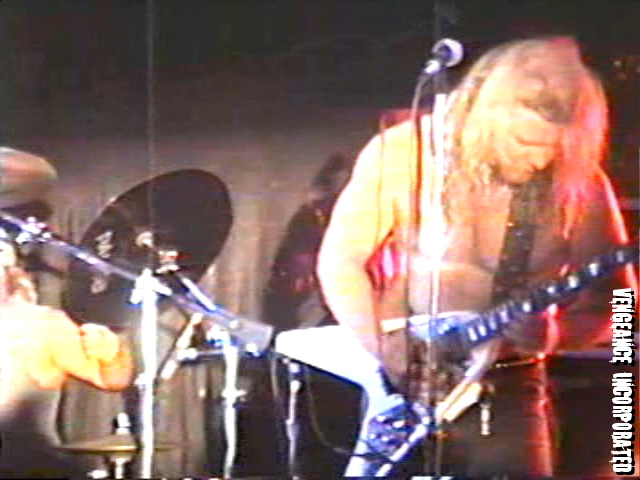 Supposed to be the last gig for lead singer Jon Oliva of the popular local band Savatage, and probably one of the best gigs we ever played.

The crowd, as you can see, is nuts, we are high on all the excitement and playing our asses off.

A few minor bad points were that, as you can probably tell, Curt can’t hear anything but himself and consequently loses the beat here and there.

Also, the soundman “savataged” us by turning Mike’s guitar completely off in the mix as well as all the backing vocals and at least half of the bass and drums.

All you hear is Curt’s guitar and my vocals, really. We had no monitors at all and I believe the subwoofers were off for our set as well.

We never would have done that to a band, I’m not saying the Savatage guys condoned that, it was usually the work of their loyal crew who thought they were only doing justice to their masters.

Personally, I always felt that the entire show reflected on the headliner and was never so insecure as to have to hamstring an opening band just so we could look better, but then I never was a big rockstar like the Savatage guys.

They might have faced such pressure that petty bullshit like that was not only condoned but encouraged. Myself, I took a personal interest in all the aspects of our show and I would have known in a second the mix was being sandbagged and would have put a stop to it myself.

But again, I’m not a megasuperstar like Oliva and Co. Karma usually comes around, and they sure got bit good a little later, so maybe there’s cosmic justice for turning off our monitors /wink wink.

It certainly didn’t matter to the crowd, who had waited like 4 hours and were ready to hear some music, they didn’t care who it was, so they loved us, and our 36 minute set of short, fast songs went over great, it was the perfect format for the perfect time.

You see by the set we cut out all the fat and long songs like Bad Crazy, Nightmare, the Cry Havoc/Carnivore medley.

We left in stuff like Curt’s solo and Reign and Goodbye ’89 because I told the guys, that’s why we’re here, to play our best stuff.

We were unscheduled to play that gig, Steve Walchotz put us in because he owed us major favors, and the 2nd opening act, Pariah, were salty about situation and grousing about “who the hell are these guys?”.

To make matters worse, our short, punchy set went over fine because the crowd was just ready to just hear some fucking music when we took the stage.

However, when we left the stage they were ready for the main act and chanted “Savatage” almost non-stop through Pariah’s set.

I have no one to kowtow to anymore and no real ax to grind, but Pariah was not a great band to begin with.

Their musicianship and showmanship was pretty thin, and that may also be why they were angry with us. They had no backing vocals, Curt blew away their lead guitarist, their lead vocalist was a growler and even the drummer wasn’t anything great.

They also had an arrogant attitude (plus they were pissed off) and it really came across. I think you can see by the video, we were just glad to be there and really chuffed by the entire thing.

I yell “HELL YEAH!!” with a goofy, happy grin on my face and we’re all feeling our oats: we were really well-rehearsed, we knew the material and this was the crowd we always waited for.

Pariah had a full hour, playing a “concert” type set, with slow songs included for pacing, but the result was the appearence of a very long and unwanted delay before the headliner, and throughout the crowd was chanting “SAVATAGE” and even openly booing and telling them to get off and bring on the main act by the end.

So they were none too fond of us, still hanging out in the flunky dressing room when their set ended. Words were said, but no blood flowed.

Probably the best gig we ever played as far as the excitement and fun, although technically far from our best performance.

If they had done us decent instead of dirty we would have done a better job staying together, but we still did a fine job and they did have my vocals up and I was in full voice.

A very great memory and worth all the dead Sunday nights we had to endure to get gigs like this.

Todd is obviously being crushed by the crowd, luckily he’s a tall guy and could shoot over their heads, although Mike not only gets mixed out of the mix, he gets the far end of the stage and not much face-time. You can see the barmaids crossing occasionally with a 6-pack.

This set was necessarily shortened for this gig. It clocks in at about 36 minutes, after we’d been told we’d get 45.

I believe we dropped Bad Crazy after being told on-stage at the last minute our set-time was being cut. We were lucky it wasn’t truncated even more, you see I rush into Action because they were trying to pull us off stage.

A good friend of ours, and a pretty big guy, named Greg was intensely debating with the stage manager, who was trying to get us off early, and he convinced him.

Also, Steve Wacholtz, the drummer for Savatage, who was very familiar with our set, told us under no uncertain terms not to do Action, as it was considered too “wimpy” for this type of show, but we played it anyway and I think the reaction speaks for itself.

Goodbye ’89 did not meet with the same enthusiasm, and in retrospect it might have been a good one to cut.

Doubly so because Curt is having some sort of problem at the beginning, or he is not paying attention, and there is a good 20 second delay in the start of the song (cut out on this video).

Mike or Chuck shouts his name and then he belatedly starts, after leaving Mike hanging for a bit.

This would have been a great one to use for the live album, however, since we get fucked so hard on the mix, that was impossible.

I did, however, splice in the intro because of the great crowd response, and used it elsewhere at that ends of songs.

I forget the guy’s name who introduced it, I think it was a DJ but I’m not really sure. At least he got the name right.

This was also supposed to be a “tribute to Freddie Mercury” by Savatage. We were going to play “Tie Your Mother Down” as a tribute but we didn’t want to step on any toes.

It ended up Oliva played a verse of “Dear Friends” or “Lily of the Valley” from Sheer Heart Attack, I forget which, but it was one of the wimpy piano songs, but anyway way that was it.

And he ended up continuing with the band as well. So, a misnamed, but satisfying night for us.