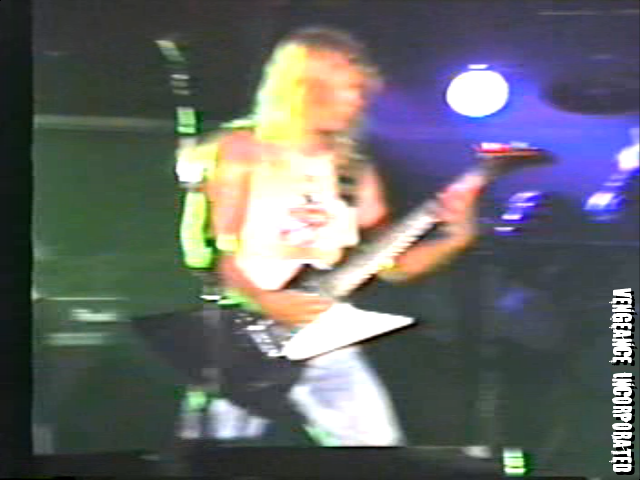 Monday Night at “The Pit” with Firstborn

Above, an ad in the local music mag, Players, for the gig. That weekend I was playing there again in Todd’s band.

This was a big deal night, a 2 camera shoot. Another of Wacholz’ promotions, “The Hellhole’s The Pit”, which sounds somewhat redundant, a pit in a hellhole, but this one was never as successful as the old original Hellhole had been, I have no idea why. Sparse audience, as I remember.

Bobby Bonds did one version from one side of the stage and Todd did another.

We talked Todd into going ahead and doing a vid even though Bobby was there with the hi-rez 1″ video the cable company lent their local show people, we had been dealing with Bobby and discovered, too late, that he was an asshole and none too intelligent on top of that.

16 years later looking at this I’m pissed off all over again, because this could have been something really important and good for us, a high quality live video.

Todd did absolutely wonderful service videotaping every gig we did- we traded favors, me with the studio and he with the vid cam and other things, but to stand there through every gig and do good work like he did is a blessing, and hardly any of these vids would be here otherwise.

Bobby, on the other hand, was a piece of work. Local cable was required by law to offer public access time to locals to put on their own shows.

If you completed a training course, you also got to check out their very professional equipment, the same kind that local TV news teams of the day took out to cover stories, 1″ analog video.

The quality was enormously better than what we had been getting, so I traded Bobby substantial hours in the studio, in return he’d tape an entire gig on 1″ tape.

Bobby had a cable access show, but with a difference: MTV at the time blocked several hours a day for “local MTV”, local programming that ran on whatever local channel carried MTV, and not just at 4am, it might be in the middle of the day or any time.

There was so little appropriate programming for the local station to run that they ran Bobby’s Metal Shop, which he only produced sporadically, about 20 times each episode.

He usually only covered national acts that came to town, schmoozing his way backstage for interviews and they were a lot more lax back then about letting you videotape them live, and he got a lot of that on.

So when it came time to do our gig, you can see the results: its not immediately evident in these flash renderings of the mpg conversions of the avi captures of the VHS bounce of the 3/4″ version of the original 1″ tape, but the VHS looks pretty damn good, and even with the 4 generations of digital bounce, its markedly better than the other vids, but that’s just it: pretty in color and clarity, nearly worthless in execution.

He showed up during our first song to set up so he missed almost all of that.

He pointed the cam at the floor for minutes at a time. He didn’t focus on the band while he moved about the room, he either turned off the camera or pointed it randomly.

He misframed shots, cut off heads then cut out after taping for about 25 minutes. A monkey with a cam on its head could have done as well. He obviously wasn’t thinking of the gig as a whole, he probably just planned on cutting it up in the editing room later, but that’s not the deal I gave him.

I should have treated him the same way in the recording studio, but I did a competent job as minimally as I could and got rid of him.

He was a beginner guitar player doing his original with a drum machine (I wasn’t about to set up a drum session for him after that) and it took about 3 hours. I recall I usually got screwed on these barter deals.

On the “tear-down” clip at the end you can see Todd Newland and his drum roadie “Marty” helping Chuck load out.

We always got first slot, but that means you have to get out of the way in like 15 mins. so the other band has 15 mins. to set up so you don’t lose the crowd.

We always tried to conscientiously get our stuff loaded, there were rock-star types who finished their sets, then ambled off to the bar to schmooze. Sometimes they got their equipment moved for them, and tempers flared.

Todd Newland was the drummer for Todd Grubb’s band, in which I also played. We were all buddies and Chuck would help roadie for him when Universe, Todd and Todd’s band, would play.

This show is a good example of the standard set we settled into at this period, with the one exception of Meltdown.

I had some resistence from the guys about adding it, and this was the one and only time it appeared on a live set.

I don’t think it was bad, although the guitar line got muffed, and there was an uncomfortable pause between my scream and the beginning of HMSQ, but I think it could have worked.

However, we ended up with a much tighter and coherent set with just the main 12; Tiger, Whipped, Bad Crazy, HMSQ, Cry Havoc, Carnivore, Reign, Predator, ’89, Damned, Nightmare and Action. Murder and Latter Days still appeared in the set, but they were no longer a mainstays by now.