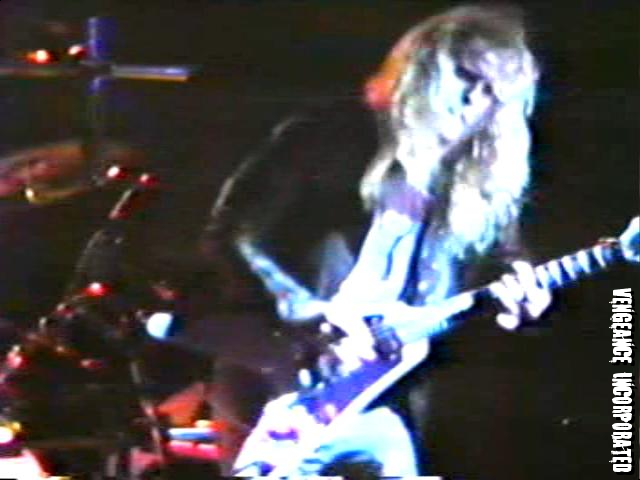 Another Sunday night, this time the first opener of 3 bands, the headliner being Paul D’Anno, ex-Iron Maiden, on some of their best albums by our reckoning, and his band, at this time called “Lone Wolf”.

Our friends Gardy Loo had the middle spot, which always sucked, that’s why we never took it.

We got the early crowd, which is the only crowd on a Monday, plus you can hear Gardy Loo and their fans talking back and forth with me: if the other band was going on after you, you got the benefit of all their fans.

There is an interesting tale behind D’Anno’s band. They showed up while we were standing out behind the bar, where there was a sort of courtyard in this property owned by the bar owner, Fred.

They rolled up in an unmarked white Econoline van and piled out of the back, 5 guys plus D’Anno, I think one guy was the road manager/roadie and the guys toted their equipment themselves.

They had all been drinking and smelled alcohol and BO.

They made it to the skanky dressing rooms we all shared and broke out bottles of whiskey, one bottle to each man, like you would drink a beer. We got to hang out and talk to Paul and tried not be idiots and ask stupid questions, but Chuck did ask him outright, what happened, why did you leave Maiden?

“Me pipes” Paul said, pointing to his throat, “me pipes went.”

I guess during their pre-fame years he had given it his all and had damaged his vocal chords and just couldn’t handle recording and touring. There was also rumors he was too drunk to perform sometimes, and I could believe that.

I think the real reason was all the top metal bands had a high-range screamer like Halford and Maiden got the chance to sack D’Anno when he turned up as drunk as most metal singers of the day.

We only watched a few songs, I’m sad to say, and left. There was not a person in the audience after Gardy Loo finished except me and Chuck, who were fans of D’Anno. Even the Gardy Loo guys didn’t hang out, and they were die-hard partiers.

The barmaids walked around tidying up and emptying ashtrays, tasks they usually did after closing.

D’Anno sang with his back to the “audience” and the band seemed bored and not all that into it, which is understandable.

I always hoped that every gig on his “tour” wasn’t like that, but couldn’t help reflecting that he didn’t do any better than we did some nights. This is the fate of the semi-star, I guess.

I don’t remember much about our performance, from my pre-gig Ren and Stimpy imitation you can see I was up and ready to play.

I’ve had that skull shirt hanging in my closet for years and only recently packed it away somewhere, since there is virtually no chance I’ll ever wear it again.

Its about the only “stage wear” I have left from those heady days. I think my fav, the GnR “Lose Your Illusions shirt, finally disintegrated and had to be put down.

Another short set; we did leave ’89 out since we were opening for the presumably very heavy D’Anno, but it ended up not mattering very much, and ’89 was a favourite of our fans.

Its basically the set from the Savatage gig with Latter Days replacing ’89.

This would be the last Monday or Sunday night Hellhole/Pit/heavy metal night we would do, they were discontinued after this for lack of interest.