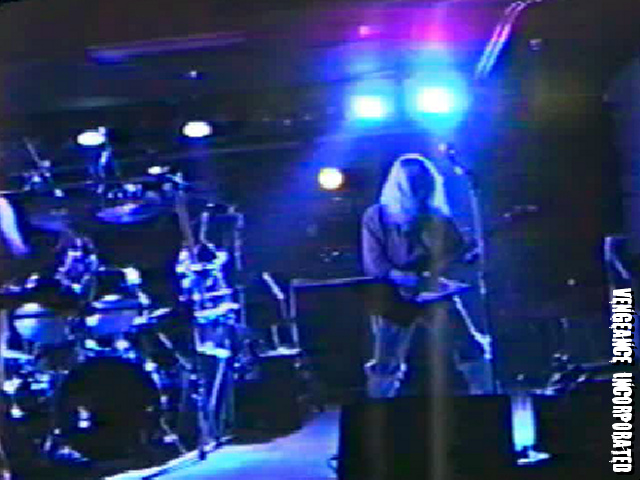 The last phase of Vengeance, or our last gasp, as a cover band playing hard rock covers when grunge was crowding out metal and hard rock.

Luckily, we lived in Tampa, which is about 5 years behind the rest of the world, and songs like Coverdale/Page’s Shake My Tree and Megadeth’s Symphony of Destruction, plus these Aerosmith songs, were what was on the radio and what the crowd wanted.

We always did very well at GK’s and were a top draw there, but after it closed there were very few other places to play and a major factor in the band folding soon after.

This is a pretty good set, but its actually early in our “cover tune” days, we did much cooler shit like Seasons of Wither and Queen’s ’39 later that I would have liked to have seen on vid instead of Are You Gonna Go and Symphony, but at least we do have vids of Highway Star, Rest in Peace and Living on the Edge, all really cool songs and I think we pull them off very well.

We were lucky to have 3 guys who could sing so we were virtually the only local band doing 3 part harmony on stuff like this, usually they had a lead singer and if they were lucky a 2nd guy singing weak harmony.

Nobody pulled off the shit we were doing, and we did get props for it.

This sound is as good as it gets, we had ace soundman Bobby Lindberg on the boards, you can hear it on Highway Star, the perfect balance between the lead guitars, the echo chase on my vocal tags, the sound effects on Living on the Edge, etc.

Bobby is still a class act behind the mixer and he always did a fantastic job for us. It didn’t hurt that we are good friends and he liked the band and the music, but he always does a great job regardless.

We were probably more successful and made a helluva lot more money doing covers.

One night the bar owner bumped us to second slot (midnight) which we hated, so in retaliation we played our old original set.

I wish I had a vid of that, we hadn’t played them in about a year so they were fresh again (we were so well rehearsed on those songs we were still tight) and we had a lot of fun playing them.

We had a loyal following of friends and the other bands and their fans respected us, we were known as a competent band playing hard shit, and we got props for it, which kind of made the sadness of the ass-end of our run a bit more fun.

Local big draws would want us to open because not only did we have a crowd, we were a good band, and to their credit they weren’t worried about being upstaged, they wanted a good show.

I’m pretty self-deprecating about most of our stuff, but I’m proud of our band and what we did, and how tight we were, and the difficulty of the material we attempted.

Its seems a terrible injustice we weren’t more successful, no one worked harder, but the world is not a fair place.