murder in your eyes 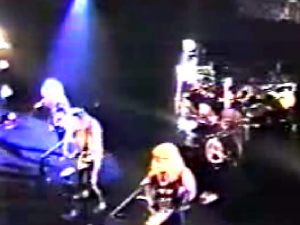 Murder in Your Eyes

Credits for Murder in Your Eyes are sketchy and incomplete, unfortunately.

Recorded at the Pepin Distributors warehouse. An overhead boom camera was used for some really dramatic shots.

Band members found out what actors and videographers already know. Shooting a video (or a movie, or a commercial or whatever) involves a lot of waiting around while cameras are set and angles prepared.

Murder in Your Eyes was basically a straightforward “live” type video.

Very clean, without looking amateurish on a very low budget.

What I remember about this is that we did everything ourselves, got the scaffold from construction jobsite where some of us were working at the time, set it all up, set up all the lights, built the stage, painted the room black, toted the equipment and whatever else.

In return for getting it shot, I closed in Larry’s carport and made a finished room inside for his office.A couple cool things on the vid, I throw my bass, the old short Rickenbacher.

Curt was no convinced that the dry ice wouldn’t damage his guitar and you see him sourly lifting his guitar out of the way, breaking character.

I changed shirts every take, against the wishes of Larry, the putative director, but I think it makes it more interesting.

It also distracts me from the fact my hair looks horrendously bad in this.

This was edited once, by Larry and a girl who actually ran the editing console, I don’t remember her name.

Mike and I thought it didn’t have enough cuts, it was too static, so we went back in and they doubled them and we picked out some shots we liked and put them in.

Larry had a lot of head-on my face screaming, which he liked but I did not care for, plus we wanted to have an equal as possible amount of face-time for all the members, and there were very few of Chuck I recall, so we put more of those in.

Basically, we just cut ever shot in half or more, increasing the feel of movement and action.

It still doesn’t look like enough cuts, I would have liked one almost ever measure, plus some incongruous stuff.

I have the master and could do another mix if I felt like it and I had a 1 inch VHS machine handy.