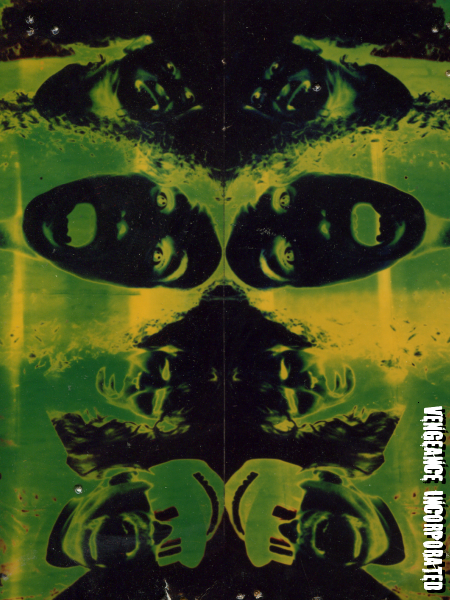 We had come up with the concept of using a fisheye lens photo for the cover. Although it looked plenty bad, it didn’t look crazy enough. These were tinting and distortion tests (done in the pre-PhotoShop days in actual film development process).

Eventually we used a negative tinted green, then mirrored, then rendered, giving it the appearance of an inkblot test.

The 2nd image is a true “cut and paste” job in the old-school sense of actually physically cutting photos with scissors and pasting them in place, where we were sticking on different heads from various shots.

The lettering for the title was by John O’Neal, who did use a computer graphics program to compose the final cover, which included all the lyrics and album credits inside, as well as a live shot from the 92.02.16 Sunday Night Graveyard Shift.
gig at the Rocket Club.