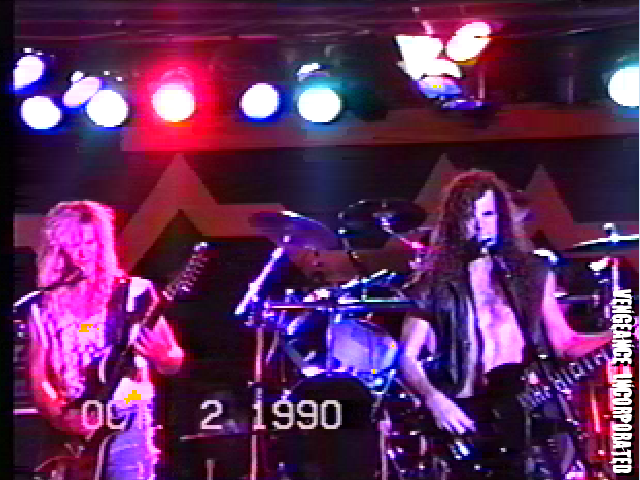 The Volley Club, a popular spot for musicians and unique in that it catered to hard rock and metal and girls actually came in, as opposed to later clubs like Ruby’s and the Sunset Grill, which were pickle parties on most nights.

I seem a little terse at the onset, again, not having fun as I usually did later, but it was one of our early gigs with this line-up, we hadn’t played much in the 2 years we’d spent writing, rehearsing and recording Bad Crazy and I consider this gig our coming out, more than the Masquerade gig because this was in front of our peers.

All the musicians came to this club and they were brutal if you weren’t really good. 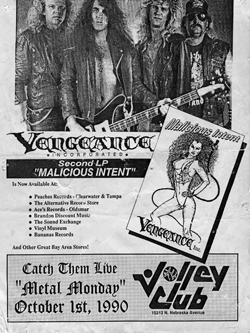 There was a lot of buzz about the band because all of us were known locally as pretty damn good musicians. I played in several high-profile projects outside of Vengeance, including Todd Grubbs’ band “Universe” as well as a very popular local alternative band “Tragic Rabbit”, let by the best vocalist I’ve ever been involved with, the incomparable Bo Smith. Members of both bands are in the audience whooping it up.

Curt was known as one of the area’s best guitarists, in a tri-city area that was brimming with talent that’s saying something, and Mike and Chuck were very respected players themselves.

We’d also done interviews and gotten a lot of world-wide press and airplay for the Malicious Intent album, it was selling well locally and had gotten great reviews in the area music mags.

So now it was time to put up or shut up and prove we pull off the complex arrangements and harmonies live.

The music was pretty damn progressive for metal at the time, with weird tempo and time signature changes, complicated structures and some fairly unique compositional techniques.

We were supremely confident: we’d knocked these together writing and rehearsing them for 2 years, doing 2 major studio projects recording these songs so we knew them inside out.

This gig is cool because it has the song Alone from Malicious Intent (sans the acoustic opening part) with a really intricate double lead part.

That was another strength of the band, our co-lead guitar attack trading off solos and playing really tough double leads.

What was so cool about the double leads Curt composed was they were effortlessly stunning technique-wise, but without relying on the tropes and tricks of the glam and poser metal bands of the time.

Also, they were very melodic and respected the underlying chords. He didn’t just noodle over the changes and play scales and random licks from out of his bag of tricks.

Mike deserves a lot of credit for learning and mastering Curt’s compositions.

Some of them, like Murder in Your Eyes were blazingly fast and he pulled them off flawlessly 99% of the time. What is amazing to me listening to these vids after all these years is the lack of “clams”, or bad notes or chords.

I’ve listened to them pretty closely multiple times while converting them and I haven’t heard a single one, which is pretty amazing, with the exception of a few notes on lead solos.

We virtually never had a “train wreck” where everyone was lost, even at the Savatage gig where they turned our monitors off and we couldn’t hear the drums very well, although we did get out of synch a few times we never lost it.

Back to the video, I kept going back and messing with the smoke machine, which had a propensity to throw all or nothing.

We’d rented it so I wanted to get our money’s worth and have plenty of smoke, but it would go out of control and drive people from the club sometimes.

The smoke does give a nice overall look to the video and makes the light beams look pretty cool. It’s annoying the date is watermarked on the damn video though.

A mosh pit gets going on the intro to Cry Havoc , which is pretty hilarious. I’m in pretty good voice this night, although I lapse out on a few parts of Alone for some reason.

I’m impressed with myself (damn I’m good!) at how I’m able to sing and play some fairly contrapuntal bass parts at the same time, but as I say we’d worked these songs endlessly.

I think my mind was actually on the smoke machine a lot of the time, I kept going back there and turning it on manually, but then it would go into overdrive and smoke out the entire club and I’d leave it off for a while. You can really see this during Reign of Terror .

We also stick in Black Ace in a weird spot, apparently it was combined with Cry Havoc instead of Carnivore at this point, a weird match.

The set was still getting it’s legs and is not as contained or well-paced as it would be.

Both these songs would be dropped from subsequent gigs. Black Ace is a very driving and effective song but it’s kind of a scattered arrangement and hard to pull off live.

The smoke machine really goes nuts during Reign of Terror and I can’t quit playing to go back and turn it off so the place was just filled with smoke.

That stuff burns your throat and eyes and is just miserable for a singer.

I think we left it off for the rest of the night after that. At the beginning of the song my brother Mitch brought fired off some CO2 fire extinguishers for a one-time per gig effect. Right after that the smoke machine goes bonkers.

The set is more geared towards Malicious Intent, as Bad Crazy had not yet been released, although we’d written some of the songs, and 4 from Bad Crazy are included. We may have been doing the demo tracks by this point.

This is the first time we played Goodbye 89 live and it’s not very great or tight, the intro is really weak. The whole thing just doesn’t flow as well as it would later.

The vocals, other lead and backing, aren’t particularly stellar either. It sounds like the soundman really backed my vocals off on this song for some reason.

I sing the old lyrics of “recalling all the years gone by” instead of days, so this is before we recorded the final version.

Damned if You Do is impossibly fast, I don’t know how we kept it together.

It has like 12 very different sections and we manage to hit all the major changes somehow. Very hard to sing all those words that quickly.