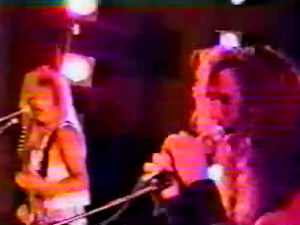 Beijing was a full-blown production, taped in a theater (the old Masquerade in Ybor City, Tampa) with a four camera shoot, models, an audience, a storyline and plenty of smoke, lights and fire.

Larry Smith of Lars lighting (Mike’s brother-in-law) was the guiding force behind both videos. He handled virtually every phase of the productions, from set-up to editing.

Much more high-tech and pro than Murder in Your Eyes, Beijing was shot in 16mm format and had digital sound.

To accommodate the plot-thread of the video, Vengeance recorded a special extended version of Beijing for the soundtrack.

Dozens of models, actors and extras were used in a plot-line that seemed to symbolize persecution and tyranny; models hands were tied and mouths taped, as if they were being forced to watch the band for brainwashing purposes or something.

This was never really made clear. Burly enforcers manhandled actors and models off the stage, as if removing them from the concert for some devious reason.

The point of all this was never really explained to the band. We just stood up there and played and let Larry do his trip. 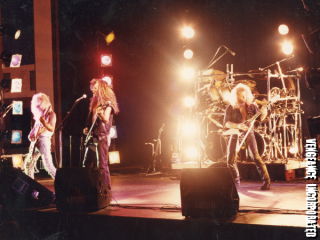 This is the video that very nearly didn’t happen.

We were annoyed with Larry over other issues, not least of which was that this video was supposed to have come off on several other occasions and was beginning to look like more of a hassle than it was worth.

Plus, the local fire marshall had reportedly shut the venue down for violations and it just seemed like one great big stupid boondoggle.

We were so sure we weren’t going to do it, Curt went off to his parents’ cabin in North Florida, which didn’t have a telephone.

Needless to say, the hassles were ironed out, Curt’s brother Dave (ex-Vengeance Drummer) fetched him from the woods and we all showed up to do the video.

The idea was that we’d do the video, then do a free concert since the PA was set up, and the venue was in the middle of Ybor City in Tampa, so there would presumably be a lot of foot traffic wondering what we were doing in there and watching.

One of the ill-considered decisions made early on by Larry was that unlike the first video, this was going to be a concept video, and the concept was so complicated no one but Larry seemed to know what the story-line was.

First, he had put an ad in the paper looking for models for an “MTV-style video” and held auditions, and remarkably dozens turned up, and more remarkable still, were not put off by the auditions, dozens more showed up at the actual shoot. Some did make it into the vid and some weren’t bad.

He also video-taped the auditions and some of them were awesome. His stage directions to them during the audition alone were worth the price of admission.

However, the shooting of the “concept” sections took for-fucking-ever, and the results were less than lame.

If any of us had ever wondered before, now we knew why such things required professional, experienced directors and actresses and actors, not to mention pro production values.

Basically, his entire prop package was roll of duct tape, the scenery was the theater, the actors:stagehands, the costumes:whatever anyone happened to have on.

On top of that, there were communication problems between the director and the actors as to what it was he wanted them to do exactly, even if they had the ability to do it, I don’t think Larry himself had it straight in his own head. I think he was winging it as he went along.

The basic premise, as I understand it, and I could definitely be wrong, was that some powers-that-be, the government, say, was taping people’s mouths shut, tying their hands behind them, and forcing them to listen to our music.

I guess the message is, a fascist government would have to be brought in to ever get people to come to our concerts, then shut up and listen to us without screaming in agony.

Some footage was left in the video, but its worse than laughable, its just boring.

On the band end, we were looking pretty good. Chuck had his new drum rack, festooned with chrome chains, Mike and I had new guitars and bass, everyone was dressed out in stage regalia and had their hair poofed up sky-high, as was the fashion of the day.

I had borrowed leather chaps from a biker-chick friend of Mike’s sister (thankfully for everyone, not buttless, I wore jeans under them) and the lighting and sound was solid.

I find it very hard to lip synch believably, so I was singing along to the 30+ takes and couldn’t talk after the session, but it was too late and we had to get out of there anyway, so the concert was (thankfully) off.

We did, however, score a gig down the street, thanks to the manager of the Masquerade who stuck their head in and was fooled into thinking we were major players.

The kicker is, the only reason I think Larry wanted to do it is because of the concept thing, so I guess the band stuff that was just a lucky by-product, and it did come out very good, and the photos are especially good.

Sadly, the funds to edit the video never materialized.

I did an un-synched version on my VHS machine, which, while it was a decent flying erase head machine (left no static “bump” on cuts) it was far from an pro editing console. What you see here is my edit, just hacked together, not a proper video at all, but its fun none the less.

I have the raw footage, and now, some 20 years later, there is digital software that will allow me to do a decent cut once I get the time.

There is footage of the band’s then-gfs, my then 2 year old niece, Alexandra, my brother, Mitch (former Vengeance 2.0 drummer) our friends and other artefacts, so its interesting to us, I dunno about anyone else.

I still have the raw superVHS tape, if anyone can digitize it for me I’d be obliged.