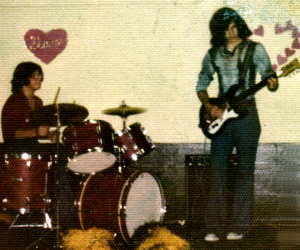 The roots of Vengeance Inc. were gigs played Guy and his brother Mitch, who also joined Vengeance after a stint in the Navy.

They played school carnivals, civic clubs and parties with their garage band line-ups during junior high and high school.

“I’d been playing electric guitar since Christmas, after playing acoustic since my birthday in October, and Mitch had only been playing drums since Christmas, before that just on practice pads. We learned some songs, rehearsed our asses off and got a gig on Feb. 14th for a Valentine’s Day dance at the local Civic Center and we were off.”

“I remember we played My Love, Band on the Run, Helen Wheels all instrumental, I played the melody line on guitar and Earl Cross played rhythm with a heavy bass sound on his guitar. We sang Slow Ride and Lyin’ Eyes in unison from mikes plugged into our guitar amps. I’m also ashamed to say we played a half-ass version of Jive Talkin’, which was a hit at the time. No one danced, they all lined up chairs and watched us, entranced. The bell-bottoms and Earl’s platforms weren’t retro then.”

“By July 4th, the band, called Neptune, (as you can see from the drum head our Dad, a sign painter and pretty good graphics artist, made for us, with the sign for Neptune in the middle) had a Bi-Centennial gig and had expanded to 6 members.”

“The vocalist was the only guy we knew who claimed to be a singer, he sang in chorus class. He sang Band on the Run like Frank Sinatra, really belting it out. It was great, just a chaotic thing, the bassist never learned the tunes and just noodled basically in key, I played the melody or lead guitar parts, Scott played most of the solos. It was a big fun mess and not quite in tune but a helluva lot of fun, and people were easily impressed I guess because we were stars around school and the neighborhood.”

After highschool, Mitch joined the Navy and Guy started a new band with some friends, which would end up as Vengeance.